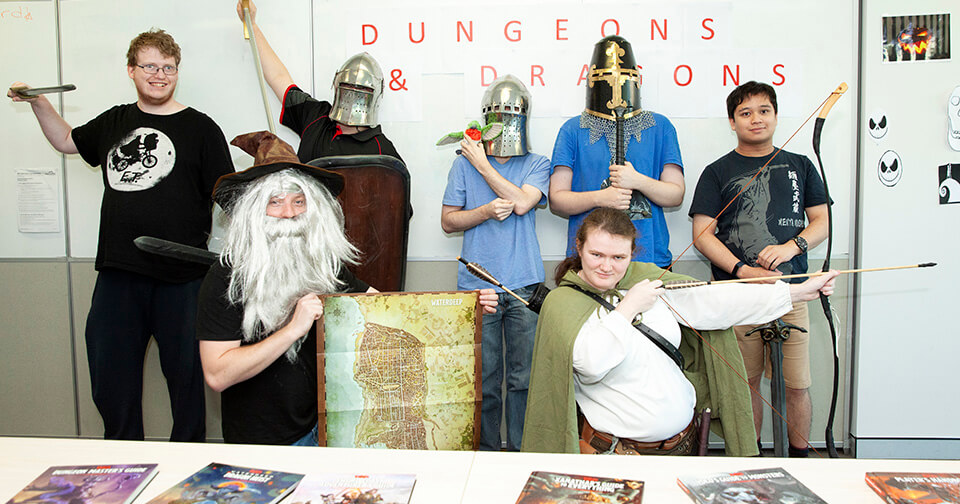 On Fridays, you’ll often find a group of six or so customers from Northcott Penrith’s Everyday Life Skills (ELS) program dressed as warriors, wizards and other fantasy characters.

It’s all part of playing the interactive role-playing board game, Dungeons and Dragons (D&D).

While it sounds like a great end to the week, the idea to incorporate D&D into the program was about more than just giving customers the chance to have a little fun in the lead-up to the weekend.

Northcott Support Worker Jarrod Robinson came up with the idea of introducing customers to the game after recognising the impact it had in his own life.

“It’s been a big part of my development as a young person because I’ve learnt how to be an adult playing this game,” he said.

“So I wanted to introduce it into ELS as a fun way of learning life skills, rather than having to just talk about it and do worksheets in a classroom setting. I wanted to incorporate something that is enjoyable as well as educational.”

Each week, Jarrod creates a new adventure for the customers to explore. He has been lucky to have support from Maddy, a customer who has been playing D&D for nine years now. Jarrod said incorporating the customer’s interest in pop culture into the game has kept them engaged in the learning process.

“Just imagine Lord of the Rings but instead of watching the movie, they are the characters in that movie and I’m creating the environment for them to explore and interact with,” Jarrod said.

The skills that D&D players develop are many and varied, including communication skills, problem solving skills, team work, money handling and maths skills.

“They have also learned not to get distracted by technology, which is quite a barrier with customers who — instead of engaging in the activity — would be focussing on their laptop or phone. Now they are more active in communicating with the people around them.”

Mitchell Power is one of half a dozen customers who are currently involved in the D&D sessions. For Mitchell, the game has allowed him to develop skills that have supported him in all areas of life.

“Playing D&D has taught me how to follow instructions, work in a team and be creative. I’ve done things that I thought I would never do, such as taking part in role plays,” he said.

“It has also developed my listening skills, which is helping me in my job at Komatsu – where I do picking and packing of mechanical parts.”

Along with the skills customers learn through the game, there’s also an important message at the centre of D&D.

“What’s cool about D&D is it really celebrates the uniqueness of the individual and the skill sets they have,” Jarrod said.

“You get a chance to see each customer’s strengths play out throughout the game and that’s great for their self confidence.”

Northcott recently moved to fresh new premises in Penrith. Check out all activities from the grand opening!

Developing social skills is important for all aspects in life, from job hunting to making friends with similar interests. If you are looking to improve your socialisation, the tips in this article might be useful!