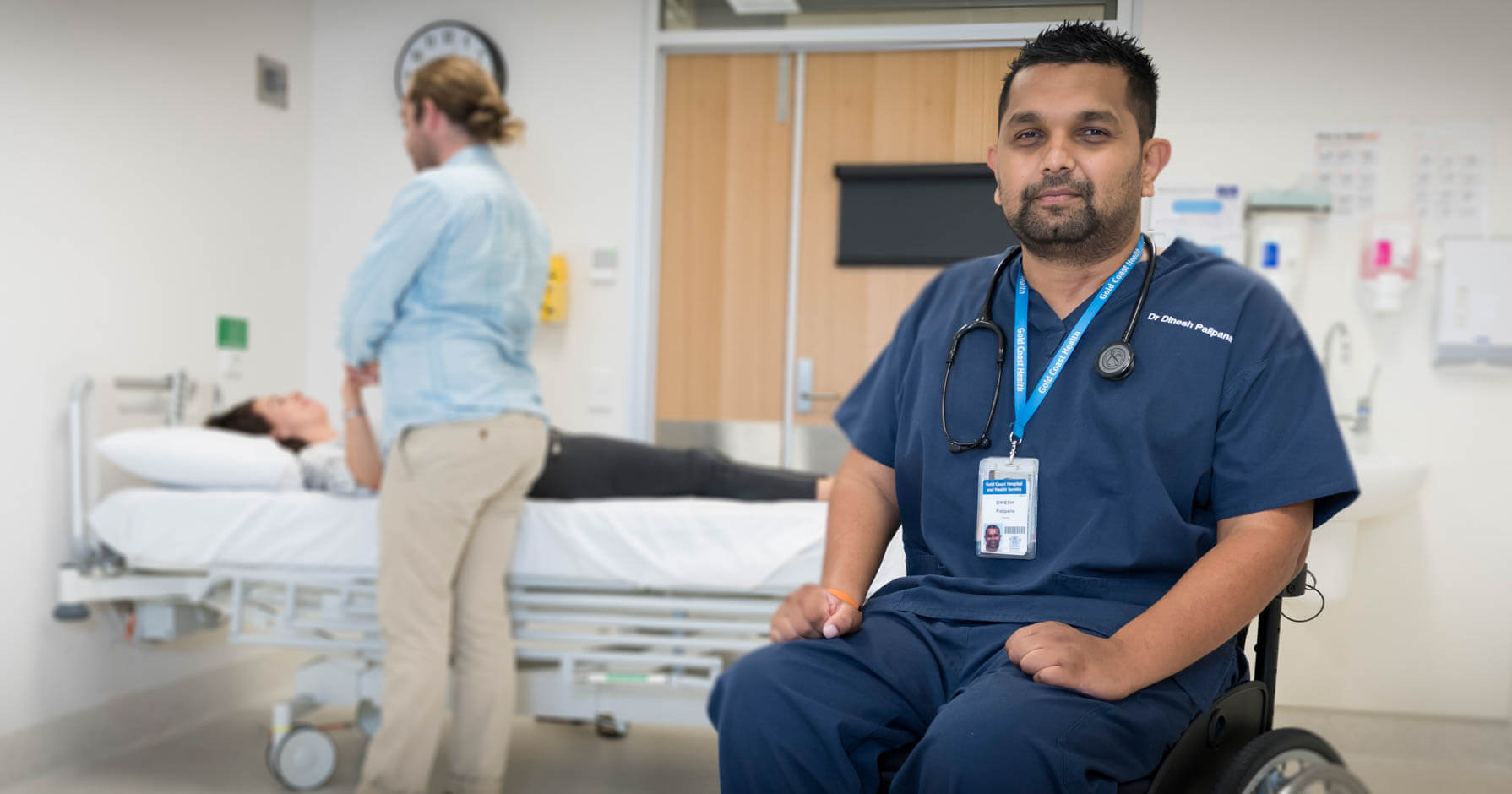 “There wasn’t a single moment where I didn’t want to go back to medical school.”

This is Dr Dinesh Palipana’s response when asked how the car accident that lead to him being paralysed from the chest down affected his goal of becoming a doctor.

With the support of a Gregory and Dolores Farrell [Tertiary] Scholarship (proudly administered by the SpineCare Foundation, a subsidiary of Northcott), Dinesh completed his degree and has gone on to be become a highly respected member of the medical profession.

Between working in a busy emergency department; being awarded an Order of Australia Medal and Gold Coast University Hospital’s Junior Doctor of the Year; and undertaking research work; Dinesh took some time to speak to us about his experiences as a doctor with disability and the importance of support and inclusion when it comes to reaching your goals.

What made you want to get into medicine?

I finished law prior to medicine, but halfway through law school I decided that it wasn’t for me. I did a bit of soul searching and I decided that medicine would be amazing, because I wanted to do something a bit more hands-on to help people. That’s how I ended up in medicine and it was definitely the best decision I ever made.

You had a car accident that lead to paralysis halfway through your degree. Did you think that would be the end of your medical career?

I thought that it might not be possible, and it wasn’t just me. I think there were a lot of people who had doubts whether I could come back and do it, but I think it just got to a point where I thought, ‘If I don’t go back and give this a shot, I’ll probably regret it for the rest of my life.’

Fortunately, I was already in medical school and they were willing to give it a try. There’d only been one other person in Australia that had come back to medical school after something like this, so we didn’t really have much to go by. But fortunately, there were enough people that were willing to give it a go, and that’s what we did, and here we are.

While you were studying you were awarded a Gregory and Dolores Farrell Scholarship, which provides financial assistance to university students who use a wheelchair as a primary form of mobility; what did that mean to you?

When I found out about the scholarship I thought, ‘Wow, this is fantastic!’. I hadn’t seen scholarships for people with disability, and this was particularly geared towards someone like me.

I am really grateful for the help that I got. Medical school was challenging, but it was even more challenging navigating it with a spinal cord injury. I think everyone with a disability knows all the financial pressures that can come with it, and just to have that eased and to see that support in my bank account, it was just such a reprieve getting through. It made a huge difference.

Just to know that there was some support and a scholarship for people with disability and that there were people who believed in students with disability making that journey was really nice as well. I’m just eternally grateful for the part that The SpineCare Foundation played.

This is my third year now and currently I’m a Senior House Officer. I work in the very busy emergency department at Gold Coast University Hospital. It’s a really interesting place to work and the department’s really supportive.

It’s everything that I imagined that it would be. Every single day you get to go to work and come across people who you can help through some of the hardest times that they go through. I think regardless of the challenges that you have in the job, you’re reminded why you’re there when you deal with people every day. The interactions and the connections that you get to make with your patients are really special.

It’s been an amazing experience and I’ve loved every minute.

What impact does being a person with disability have on your work, and what has been the response from patients?

I think we’re at a time where there’s a lot of technology that bridges the physical gap if you have a disability and you’re working as a doctor. Technology has made it quite easy for me to do the things that I might not have been able to do previously. Also, I work in a new hospital so it’s very accessible. The desks are at the right height, and it’s a digital hospital, which makes it even easier to do things. So from a work perspective, it’s actually been a lot easier than I imagined, and probably a lot easier than anyone else imagined.

In regards to the patients, they have been amazing. I’ve dealt with so many patients now, and every single one has been positive, without exception, which is amazing, because I thought at least one person might’ve said something negative or had some concerns.

I imagine that being a person with disability you can relate to patients with disability in a way that abled-bodied medical professionals can’t. Do you find that those patients feel a certain bond with you, knowing that you have an understanding of disability firsthand?

Yes that is something I’ve noticed and it reminds me of one particular interaction. It was really late at night, and there was a patient who had a significant disability. I started looking after them, and then shortly into that interaction, they said, ‘I wanted to tell you that I’m really glad that you walked in, because I knew that you’d understand what I’m going through.’ That was a really special moment, because it makes it all worthwhile. It’s just nice to see that someone feels that way.

Have you had any support from other doctors with disability?

Myself and two other doctors have founded an organisation called Doctors With Disabilities Australia. It aims to help other doctors that might have various disabilities, but also create some change for policies around disability and medicine. Right now, a lot of the policy around medical education, employment, and even some parts of specialist training, are not very inclusive to people with disability. Some bits of those areas are actually quite prescriptively exclusive. So we’re trying to change some of that.

There are still some barriers that we need to change, and I think it’s important that we get on top of that, because medicine should be inclusive and we should have people with lived experience of disability working in the medical field. I think it also has a flow-on effect to other areas of employment, so if we can show some leadership and be inclusive in medicine, I think other areas of employment can follow our lead.

You’re also involved in spinal cord injury research, can you tell us a bit about that?

That’s something I’m doing at Griffith University. Griffith has two projects and I’m more directly involved in the one that looks at regenerating or restoring function in people with spinal cord injury through new rehabilitation techniques.

We have a device that reads your brain waves or thoughts, and translates those thoughts into electrical currents that make your muscles move. That, along with some medications, has, in the early studies around the world, shown to restore some function in people with spinal cord injury. So I have a very selfish motive for taking that forward.

I just feel lucky to be in the right place at the right time to be able to do this. My co-conspirator for the spinal cord work is actually my neighbour! We just happened to be chatting one day and he told me that he’s a researcher at Griffith, where I went to medical school, and then we just started talking about spinal cord injury and we kicked this off together.

Wow, that’s amazing! Most people just borrow sugar from their neighbour, not start a research project.

Well, he has actually come over to borrow sugar as well…

You were recently awarded an Order of Australia Medal, congratulations! What did it mean to you to receive that sort of accolade?

I was pretty speechless actually, and so humbled. I still don’t know what to say. I’m blown away, and it’s so nice to just be recognised at that level. It’s such an honour. It just makes it all worthwhile and it makes me want to do more and be better. It’s just amazing.

What would you say to people with disability who might be considering getting into medicine?

I think, as cliché as it sounds, you’ve got to follow your dream, and you’ve got to give it your best try. Fear can hold us back, and fear can put up barriers, but you’ve just got to have the courage to work through those fears and the courage to take the leap. At the end of the day, only you are going to be accountable for the decisions you make. If you haven’t decided to give life the best shot, and if you haven’t decided to pursue the things that you wanted to, I think that regret is too big a price to pay at the end of it.