Why I walked out of a disability conference in fury 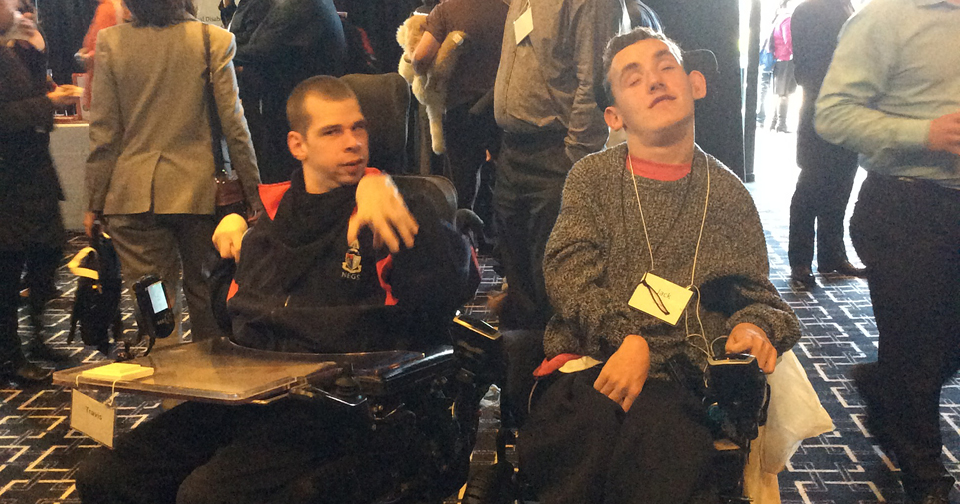 Our customer Trav recently attended the NSW Council for Intellectual Disability’s annual conference in Sydney. Themed, Change, Challenge, Create, the conference promised to ‘create action to make life better for people with intellectual disability’ so Trav, one of Northcott’s Inclusion Champions, was keen to know more. While he enjoyed most of the conference, something on Day Two didn’t quite gel with him. Read his account of the conference to find out what made his blood boil.

The theme for the first day was ‘challenges’. We got to hear from Justine Perkins, from Touched by Olivia. Justine is a mum who convinced her local Member of Parliament to build a playground in memory of her daughter, Olivia, who died at eight months old from a rare disease. Justine had a huge fight with Penrith Council, but her persistence paid off and the playground was finally built!

Because this conference involves people with disability as well as workers, academics and policy makers, we did a lot of group work together. In groups, we talked about challenges that people with disability face. A really good example is going out at night – many people with disability just don’t go out! This is because most respite homes and group homes only have one staff working after a certain time at night and most transfers with a hoist have to be done with two support workers. Some solutions we discussed would be to get late-night homecare or to be able to book an accessible hotel room for the night.

The next session I attended was ‘Speak Up’, where we had to name some things that make us happy. I said one of things that makes me happy was spending time with my friends, without my mum, just like most 23-year-old guys!

Lunchtime was for mingling and connecting. One of the best things for me was that one of my best friends from high school was there, so in each break we got to catch up. One of my support workers also ran into one of her cousins that she hadn’t seen in 30-odd years!

After lunch we talked about what made us really unhappy in life. My rant was about the Easter Show and how the rides are not wheelchair accessible. This is not fair, especially these days when so many people with disability go out in the community.

After a short break we started talking about living and dying, which, surprisingly, was not at all morbid. It was actually quite funny. My support worker told the story of her mother’s funeral. Her mother had hated music and just as the family got to the gravesite, the music they’d plan wouldn’t start!

People were asked what they wished for in their death. One person spoke about the ‘death farm’ up in the Blue Mountains, where you can leave your body for the crows to eat. On one hand, that sounds like a disturbing way to go, but on the other hand, it is pretty ecologically smart, because your body isn’t going to waste – it’s providing a decent meal for the birds!

If Day One was about life’s challenges, then Day Two was about trying to have more influence.

In the first session we were asked what question or statement we would like to make to Christian Porter MP, the Federal Minister for Social Services. My statement was: ‘The Government needs to make more information about the NDIS clear, as most of us and our carers do not understand it.’

Things got a bit more confronting after morning tea, but I’ll explain why in a moment. The session was about supported decision-making. Two short films were screened. The first film was about a girl named Alicia, who had started doing speed dating. She spoke about how she didn‘t let her disability stop her from getting out there and meeting new people. She also spoke about her fear and how she overcame that fear through drawing. For her, drawing helped her accept herself and helped her feel comfortable enough to go out and meet guys.

Then the session got pretty confronting. The second film was about a man who lived in a group home. The staff had changed his diet because he was a bit chubby, but they hadn’t asked the man or his family. This made me so angry, because the guy wasn’t getting his right to choose. As I continued to watch the female support worker’s disgusting attitude towards the man and his father, I could literally feel my blood boil with fury, because some support workers are just like that. As my anger peaked I couldn’t sit in that room watching the support worker denying that man his rights. I had to walk out and calm down.

I went back into the conference later, but I had lost interest. Denying people with disability their rights means a lot to me and I couldn’t stop thinking about that man in the film for the rest of the day.