Tales from Two: Tyson and Hayley 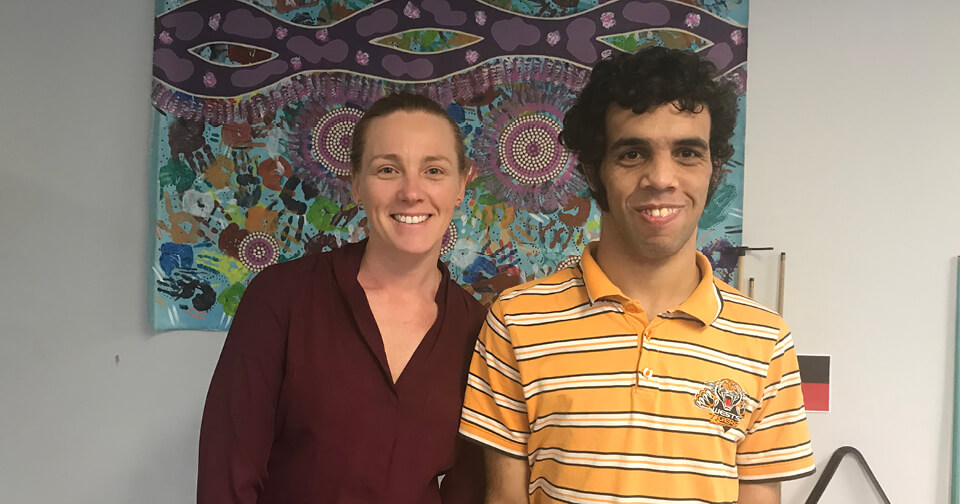 When our Taree customer Tyson first met his Northcott support coordinator, Hayley, she thought he was a little shy. Boy was she wrong! Hayley has since discovered that Tyson has a love of drama, movies, pop culture and socialising. Support from Hayley, as well as Taree’s Everyday Life Skills and In-home and Community Supports services, has seen Tyson’s confidence swell. He’s a special member of our Taree community. When he had major surgery to remove a tumour on his brain in 2018, Hayley was there to support Tyson and his family throughout his recovery. Read about their special bond.

Tyson: When I first met Hayley I felt good. I wasn’t nervous. We met here at Northcott.

Hayley is nice, thoughtful and very good. She is sometimes funny and makes me laugh.

I talk about my NDIS plan every time I see Hayley at Northcott, which is about two times per week. I also enjoy talking to her about movies, TV shows and music. She is supporting me to become more independent.

I was very impressed when she came down to John Hunter Hospital [in Newcastle] to visit me [after my surgery].

I now attend Everyday Life skills with Northcott twice a week on Mondays and Thursdays. I enjoy being together with others in the group and building good relationships. My favourite activity is listening to Nickelback during music group.

This year, I’d like Hayley to support me to attend a Nickelback concert; see the Godzilla movie, King of the Monsters; and visit the museum to see the dinosaurs.

Hayley: My first impressions of Tyson were that he was very quiet and reserved…I was wrong! During our first meeting Tyson’s mother, Fiona, did most of the talking and Tyson barely said much. Fast forward two years and Tyson is what I would describe as a “Chatty Cathy”!

Tyson has a sparkling and dynamic personality. He has a strong interest in movies, particularly Superhero movies. He’s always updating me on the latest movies, and interesting facts about cars and dinosaurs. He is also a true gentleman. He always goes out of his way to open doors for ladies.

In the last few years, I have seen Tyson grow into a confident and social young man. When we first met him, he never left his house. He stayed at home and played video games. Since joining Coordination of Supports, we’ve been able to support Tyson to increase his independence and social network by linking him to a range of different social supports and services. He’s made a lot of new friends. Tyson is also involved in a drama troop. It was really satisfying to watch him perform in the play “The Descendants”, where he played the role of the king.

Since I met Tyson I’ve noticed that his communication skills have improved dramatically. He used to keep to himself a lot and would only have conversations with the staff that support him. Now he has really come out of his shell. I often see him at Everyday Life Skills chatting to a range of people with confidence.

Tyson has suffered from severe epilepsy. In 2018 he had a big operation to remove a tumour from his brain that was causing the seizures. It was really rewarding to work with his allied health team to ensure that he was able to make a full recovery. During the recovery process, we needed to alter his supports to ensure his safety. His wants and needs changed after the operation and he asked to change his social supports. This is when he joined Northcott’s Everyday Life Skills program. He’s been loving it ever since. It has been inspiring to watch Tyson fight back and make a full recovery.

2018 was such a big year for Tyson so 2019 has been a time for security and routine. Now that his recovery is over, Tyson has been enjoying time with his friends. He’s been really committed to acting with his drama troop. For his next plan we are looking at focussing on therapies, such as speech therapy, to ensure that his communication skills continue to develop in a positive direction.

Tyson’s family randomly selected Northcott as their Coordination of Supports service provider. I am very thankful for this. It has been an absolute pleasure to know and support not only such an amazing individual, but a strong family.

Curious about our Coordination of Supports service? We explain it here.

In Tamworth, our customer Bob has benefitted greatly from assistance from his support coordinator, Carla.