Roger gets a very special surprise on his 70th birthday 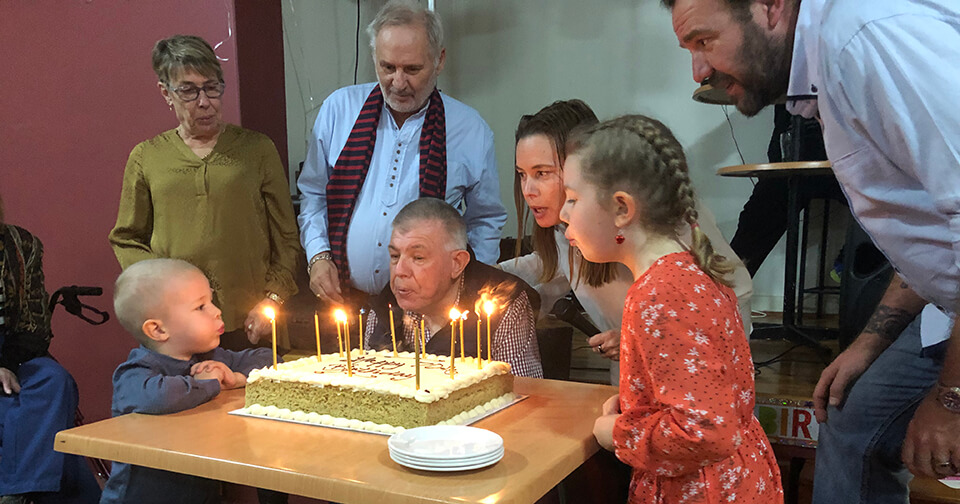 Roger blowing the candles with a little help from his niece and nephew.

Roger lives in Northcott’s disability accommodation in Cootamundra, NSW. As his 70th birthday was getting close, staff in the home asked him how he would like to celebrate this special birthday. While Roger said he would be happy to celebrate with a couple of shandies and spring rolls at the pub, Northcott staff felt this important milestone needed a bigger celebration.

The team at the Cootamundra house knows Roger well, and they know his family and extended family are very important to him, so with Roger’s sister Roslyn as accomplice, they decided to throw Roger a surprise birthday party.

Roslyn was thrilled at the idea, and the next day she sent a guest list with over 70 relatives to invite! After a couple of months of preparation, Roger’s big birthday surprise was coming together nicely. With the venue booked, DJ organised and a big orange poppy seed birthday cake (Roger’s favourite) ready to go, Roger’s big day came around at the speed of light!

All of the invited guests gathered at the venue before Roger’s arrival and finally the moment of the big surprise happened! Roger was in shock when he entered the room, where more than 60 family members, friends and Northcott staff started cheering, clapping and wishing him a happy birthday. Roger had the biggest smile we’ve ever seen!

At the celebration, Roger enjoyed catching up with relatives that had travelled from Queensland, Sydney, Melbourne and Albury.

“The best part of the party was seeing my cousins that I have not seen for more than 15 years. I wasn’t expecting all my family to come; it was a massive surprise!” Roger said.

“I also enjoyed singing songs from Jonny O’Keefe, Bill Hayley and Paul Anka for my guests.”

Everyone attending had a wonderful night and Roger definitely had a few shandies and spring rolls as requested. He enjoyed a night of chatting, reminiscing, singing and dancing. Relatives were also thankful for the night they got to share with Roger, as this worked as a family reunion as well.

It was so rewarding for staff to see that grin from ear to ear on Roger’s face; some of them even became a little teary as he entered the room!

Looking for your next home? Check out our disability accommodation vacancy page.

Read about Craig, who is living independently at Northcott’s five-villa complex in Merrylands.