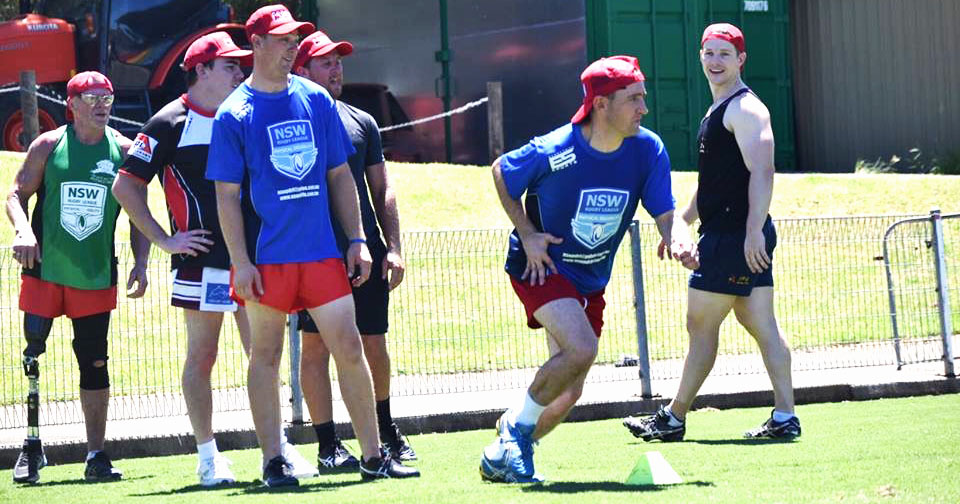 When it comes to disability inclusion, Northcott Support Coordinator Joshua Toohey is kicking some major goals.

The passionate footy fan has been selected to join his friend and fellow disability worker Luke Muttdon as coach of the Commonwealth All Stars Physical Disability Rugby League Team.

The team will compete in the 2018 Rugby League Commonwealth Championships this year in Brisbane on Friday February 23 and Saturday February 24.

Selection trials were held before Christmas and the team is now training in Sydney most weekends – with some players travelling from as far as Dubbo and the north coast of New South Wales to attend the two-hour long sessions.

The guys have received plenty of support, with the National Rugby League (NRL) club Wests Tigers offering their training facilities at Concord for the team to use during one of their training sessions.

Being given the opportunity to coach the All Stars team was a dream come true for Josh, who has spent many years working in the disability sector.

“Sport, and footy in particular, is something I’m really passionate about, and so is the disability sector, so it’s really cool that we get to combine the two,” Josh says.

“In the past I’ve created fitness programs and sport programs that catered to the needs of the people I work with, so it’s been helpful having had some experience in that area.”

The championship will bring together seventeen teams from ten different countries, including three teams with physical disability. The games aim to promote sporting inclusion for people with disability, something Josh is clearly passionate about.

“I think it’s important to create an inclusive environment in any area of life – whether it be sport, work or social activities,” Josh says.

“It’s a bit of a cliché but I think everyone should be treated the same and have the same opportunities. Programs like this, and sports like this, allow people with different barriers to be able to access these recreational activities like anyone else.”

With the championships only a couple of weeks away, and the training shirts having just been handed out, the team is getting excited about the prospect of taking to the field for such a popular sporting event.

“All the team members are really excited and it’s been so much fun,” Josh says.

“So many of the guys involved love the sport, they just haven’t been able to play due to their disability. For others, they did play when they were younger but have since had an accident that has prevented them from continuing to play. So this is a format where they can play again. It’s just a really positive vibe.

“The boys are really excited which makes me excited.”

Keen to get involved in sport? Check out the Northcott events page for more info on our upcoming swimming carnivals.