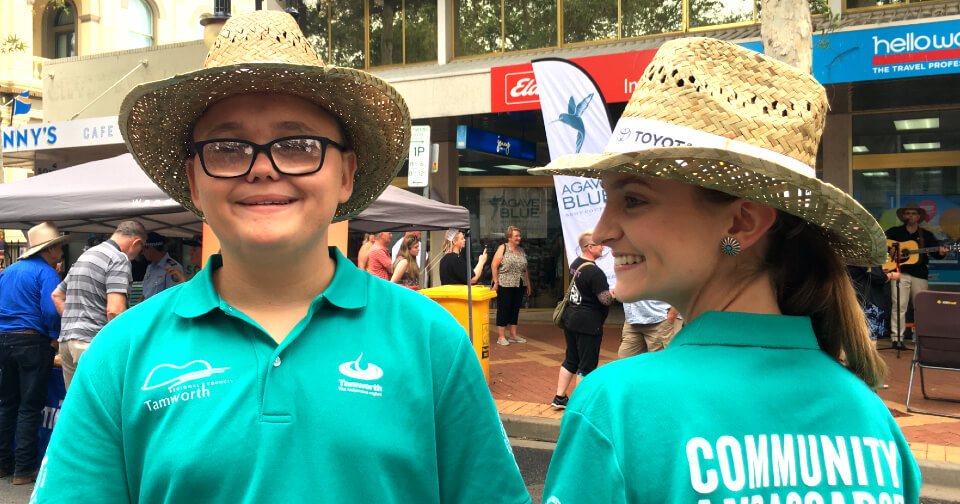 Two years ago the most common place to find our Tamworth customer, Jayden, was in his bedroom. This year, thanks to confidence-building support from Northcott, the 17-year-old has been hitting the main streets of Tamworth as a Country Music Festival Community Ambassador, acting as a guide for visitors enjoying the festival.

Jayden is a self-confessed country music fan. He lists Lee Kernaghan as one of his favourites and admits one of the reasons he wanted to be a Festival Community Ambassador was to have the chance to attend the Golden Guitar Awards and watch a star-studded line-up of country music performers.

Jayden, who has dysplastic cerebral palsy, vision and hearing impairments, autism and mild intellectual disability, accesses Northcott’s In-home and Community Support service. Our Tamworth Support Worker, Matilda, has supported him throughout the festival.

“As an Ambassador, I get the opportunity to talk to people and communicate with everyone. It’s been a really fun time and I’ve been asked to do it again next year,” Jayden says.

As part of his role, Jayden received training late last year and has worked four shifts in the community, attended a breakfast that was aired on Channel Seven’s Sunrise program, and best of all, attended the Golden Guitar Awards ceremony.

“I was in Fitzroy Street on the pop-up information stand and on Monday I was in Peel Street – the main street,” he explains. He also completed shifts at the festival HQ.

Jayden’s mother, Zandie, is extremely proud of her son’s achievements and is grateful for all the support from Matilda and the Northcott team.

Prior to receiving an NDIS plan, Jayden accessed limited support and services. Zandie says having funding to cover one-on-one support has made a world of difference to Jayden.

“Before, he just stayed at home. He didn’t really do much at all. Now he’s out all the time!” she says, laughing.

“It’s a big difference. He’s more confident. He’s more social and gives anything a go now. Two years ago he would have never dreamt of being a Festival Ambassador.”

Jayden and Matilda have been working together for almost a year, growing Jayden’s confidence, independence and job-ready skills. The pair gets out and about around Tamworth and every Wednesday Matilda supports Jayden in his volunteer job at Jamaica Blue Cafe.

Jayden enjoys his time with Matilda and is particularly grateful for her support with connecting him with Jamaica Blue, where he prepares food and drinks and serves customers.

“Matilda is funny and awesome! She’s helped me achieve things I’ve wanted to do, like getting to volunteer at Jamaica Blue. She is the person who got me that role. I’ve always wanted to start a career in cooking and hospitality,” he says.

With Year 11 kicking off for Jayden this week, the go-getter has some big goals to achieve.

“This year, I’d like to do a barista course and I’m going to continue with Jamaica Blue and hopefully get a job there.”

There’s also the 2021 Tamworth Country Music Festival to gear up for at the end of the year.

Our Tamworth office provides a range of services, including In-home and Community Support and Everyday Life Skills, where customers like Scott are developing their skills.