Going the distance with Northcott 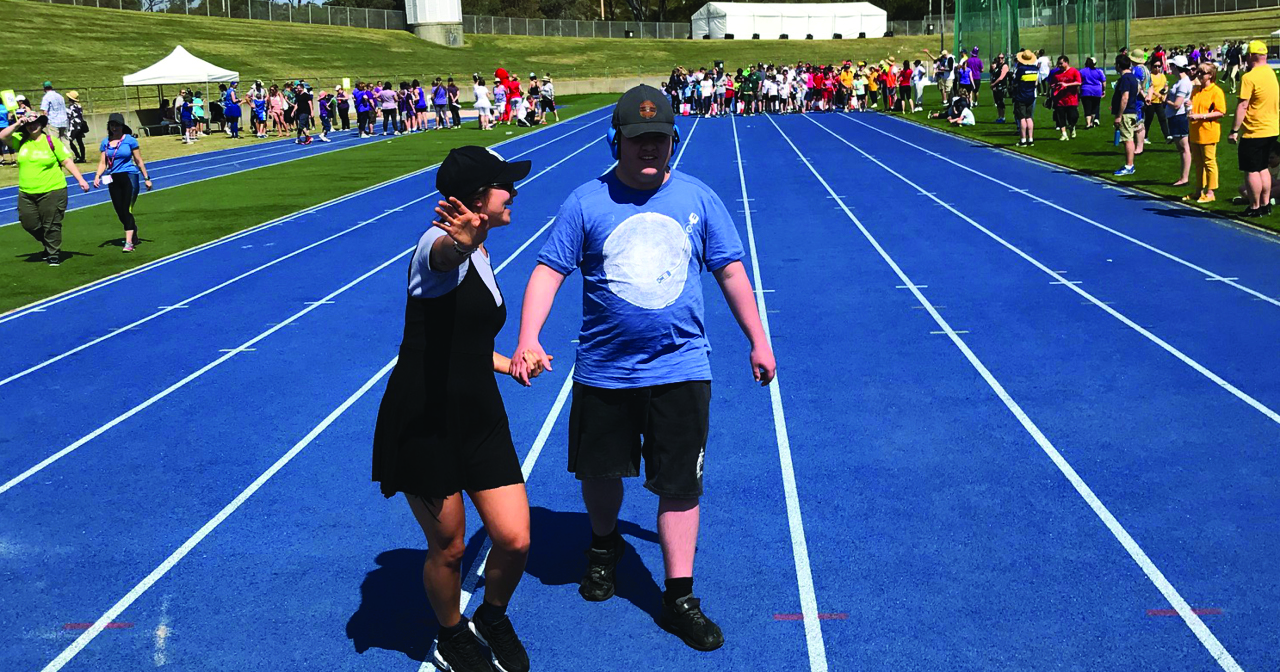 Northcott support worker Saya assisted 16-year-old Samuel, who has severe autism, to spend a whole day at a noisy athletics carnival for the first time.

For Samuel, attending his school’s athletics carnivals is usually a painful experience. He is noise sensitive and becomes easily over-loaded at busy events. For years he has been taken home by his mother after about an hour at the carnival.

This year his mother Gina was unable to accompany him to the event due to work commitments. She approached Sam’s Northcott support worker, Saya, for assistance with Sam to attend his carnival. Part of the arrangement was once Sam became overwhelmed, Saya could approach the teacher and inform them of their departure.

Samuel has been with Northcott for just under three years accessing the In Home and Community Supports service. We spoke to Gina about how Northcott supported Samuel on his first full-day at his school athletics carnival.

How was this year’s athletics carnival different for Samuel?

In the past I usually allow Samuel to travel in the school bus to the carnival and I meet him at the entrance. Samuel usually participates in the march past and one or two activities.

The afternoon of this year’s carnival, I received photographs from Samuel’s teacher indicating not only his high level of participation, but that he had remained at the noisy event all day and had been a participant in all relevant events for his age group.

What role did Northcott staff play in supporting Samuel to spend the whole day at the athletics carnival?

Even though his school and teachers are phenomenal, on the day there is so much responsibility for all of them. Samuel having Saya by his side all day contributed to his success that day. Saya is incredibly patient, perceptive and switched on when Samuel is in her care. Her approach is not one of just a support worker.

Over the three years she has worked with Samuel, she has treated him as almost a peer and definitely as a companion.

How did Saya support Samuel throughout the day?

She is able to read his version of sign language, gauge his emotions and respond accordingly. Even though Samuel is non-verbal, he is very communicative and it takes a special support worker such as Saya to build rapport with Samuel.

Her efforts to treat Samuel with respect, communicate with him and befriend him translate to a special bond. That bond gives Samuel the confidence to become more involved as he trusts Saya. He knows she is there for him.

How did Samuel feel being more involved in his school athletics carnival?

Over the years he has returned home from this event a little restless. Instead, that night he was in great spirits, walking about the house with his head held high. We could tell that he was feeling very good about himself. The day absolutely increased his self-esteem.

Anything else you’d like to add about your experience with Northcott?

In terms of Saya the school were obviously very impressed by her assistance. As a family we know we are blessed to have Saya in our lives; she is just so personable, reliable and understanding – so very easy to get along with and a great fit for our family and for Samuel in particular.

We are very grateful as a family for Saya’s assistance and genuine care. She has made a tremendous impact on our lives as a family and helps ease the stress of living with a teenager with severe disability.

Keen to get your child involved in an accessible carnival? Keep an eye on the Events page for upcoming Northcott sports carnivals.

Find out how Northcott can support your child to get the most of school.