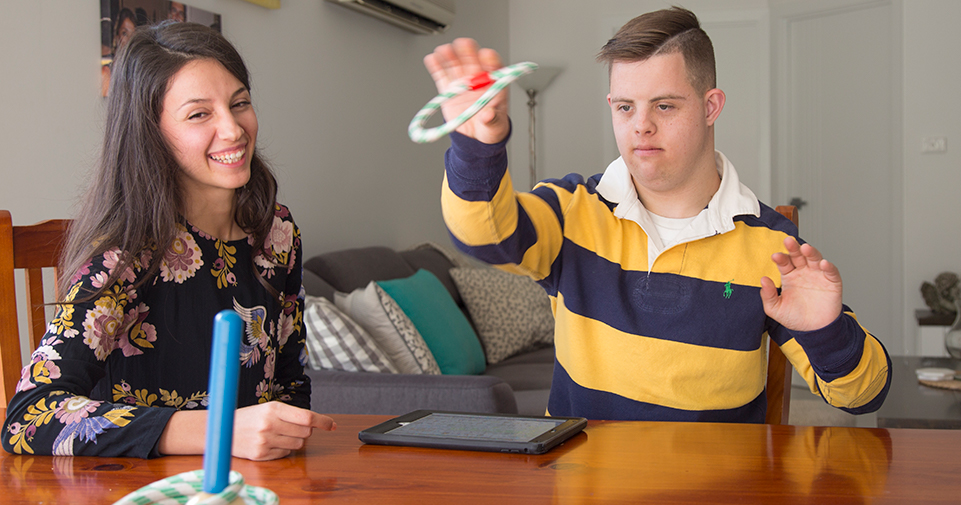 What does McDonalds, basketball and Guess Who have in common? They all form part of the speech therapy strategy that Northcott Speech Pathologist Candice Slosu uses during her sessions with Northcott customer James.

James and Candice have been working together since 2016 to improve James’ communication skills.

After his twin brother Luke passed away in 2015, James not only lost a brother, he also lost his support system.

“James relied on his brother to communicate. They did everything together and bounced off each other,” Candice explained.

“After his brother passed away, the grief and loss of his way of communicating changed everything.”

Candice knew that the only way to support James to develop his communication skills was to ensure the process was engaging and tailored to James’ lifestyle.

“With therapy I don’t bring the activities I want to do. I say ‘ok what does he like, ok we’ll do that’; ‘where does he go, ok we’ll go there’, rather than the reverse.

“Especially for James, it’s important to make it meaningful to him to encourage him to have a back and forth interaction, which is something he has struggled with in the past.”

For James’ mum Gina this refreshing and creative approach has ensured James is motivated to improve his communication.

“Candice tries to engage James in things that he is interested in, so of course McDonalds and food is very interesting to him,” she laughed.

“Other times we’ve gone to the park because he loves basketball. He plays basketball every Tuesday, so it’s sort of a reward for him. Candice will get him to participate in the session and then shoot some hoops.

“It’s very positive for him because he doesn’t engage very easily, especially because of his brother no longer being here, I think he’s trying to get that motivation back.”

As part of the therapy, Candice has also recently started utilising the LAMP Words For Life program – an augmentative and alternative communication app.

“Now that we have the system on his iPad we will go to his workplace and go to McDonalds and go to the community, basically go wherever he is and support him to use the device in that setting,” Candice said.

Though it’s still early days, Gina has seen improvements in the way James interacts not only with his family but with the wider community.

“He is getting a bit more vocal and instigating conversation, whereas he never used to,” she said.

“It was always ‘well come on James what do you want to do?’ and he would shrug his shoulders. He would go with the flow, but he never really wanted to make decisions.

“Now we can have a conversation and address his needs if he wants something or is requesting something. We can elaborate and discuss what he says, whereas before it was very cut and dry. Now he is prepared to continue the conversation a bit more.

“Finally he’s starting to stand on his own two feet a little bit, however hard it might be for him. It’s always been Luke and James, but now he is actually starting to have a voice and have a conversation and have an opinion.

Find out how assistive technology can empower people to have choice, control and independence