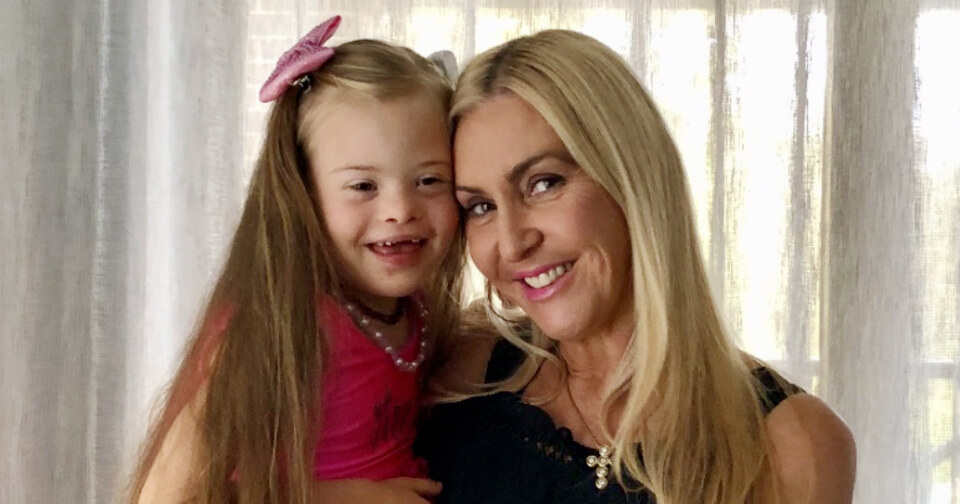 “Ellie is very sweet and lovely, she gives the best cuddles. She loves swimming; I can’t describe her excitement when I’m putting her swimmers on. She also loves to dance and clap her hands.”

Rachael Power is talking about her daughter Elliana who is the youngest of seven children and was born with Down syndrome. “Ellie is constantly surrounded by her big family; kids are always around and all their friends love her. She brings so much joy to our family and she gets the best out of other people.”

When Ellie was three-years-old, she was diagnosed with autism, which meant she would need substantial support. Ellie is now six-and-a-half, and she needs a variety of intensive therapy treatments to support her development.

This year has been a big year for Ellie as she started going to school. She attends the support unit at her local school. “Since Ellie was born, I’ve cared for her 24 hours [a day], so this year it was hard to leave her at school. However, the team is amazing and we can see small improvements for Ellie,” says Rachael.

When asked about what’s different about having a child with a disability, Rachael comments that it’s hard, but at the end of the day they go with it and the love Ellie has to give back makes everything worth it; the hugs she gives and the smile on her face … sometimes you just don’t need words. “All children are awesome and hard work at the same time. Ellie is a bit more work than my other children were, but we love her as she is. We love her differently because she needs it; she needs a different kind of parenting.”

Rachael met Northcott Early Childhood Early Intervention (ECEI) coordinators Ashlee Law and Bindy Charley in Port Macquarie and she is glad she met them. “They were wonderful. They talked through Ellie’s and my needs. They were very supportive and made themselves available for any questions I would have. Having an NDIS plan in place made a very big difference. Without it, Ellie wouldn’t get half of the therapy she gets and what she has now is exactly what she needs.

“One of Ellie’s goals for this year was to self feed with a spoon and to drink water from a cup. Such simple goals, yet so exciting for her to achieve! Her next big goal is communication, either through signs or words. To hear her say mummy would be the best thing in the world.”

When talking about other families that could be going through a similar journey and what she can say to those families, Rachael emphasises it’s overwhelming, but they’ll be ok. She highlights the importance of getting support from the very start; with her husband, her mum and therapists, they created the perfect team to support Ellie.

“Another thing I would say is not to think too far into the future. Take it step by step and celebrate the small achievements. And be grateful for all the support they can get, this doesn’t happen everywhere.”

When asked about Ellie’s future, Rachael says, “my big hope for Ellie is that one day she will be able to feed herself, be toilet trained and to be able to communicate her needs. We know Ellie will be with us forever, and we look forward to spending the rest of our lives with her.”

Learn how parents are getting support through the First Steps on Early Intervention program in Port Macquarie and Coffs Harbour.

Get to know more about how Northcott ECEI can support you and your child.