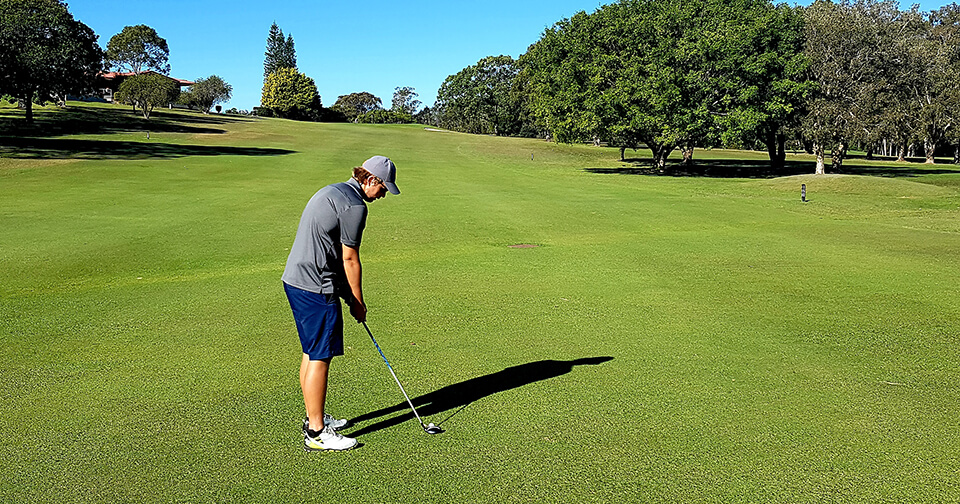 Each week our Coffs Harbour customer Tom gets together with his Support Worker James – along with golf pro Brendan – to play golf. Tom started playing less than a year ago, but is now able to outperform James, who grew up playing the sport.

It’s a pretty impressive achievement, made even more impressive when you learn that Tom experiences short-term memory loss after suffering a brain injury at the age of 17.

“Tom won’t remember that he played golf that day, but when he has a lesson he still learns that new skill; like putting, or chipping out of a bunker,” Support Worker James says.

“He’ll retain it, and then when we play the next time you’ll notice that he’s actually learnt it. He doesn’t remember ever going there but he is still picking up the skills.”

Tom’s enjoyment of the sport is no doubt spurring him on, and when asked how he feels about golf Tom’s response is: “I love it too much to stop!”

His passion for the sport is so great that Tom’s current goal is to compete at the Special Olympics in Macau next year.

Tom first picked up a club after James, who works with Tom as part of Northcott’s In Home and Community Supports service, recognised an opportunity to get Tom involved in a new activity through his dad’s contacts.

“My dad is a golf pro and he suggested golf as an activity for Tom,” James says.

“Brendan, who is a golf pro at the local Sawtell Golf Club and used to work for my dad, is the coach of the Australian Special Olympics Team for golf and his speciality is working with people with disability who play golf.

“The club is around the corner from Tom’s house, so it all just sort of worked out. Plus, I’ve got thousands of golf clubs at home and everything he’d need to play golf so we decided to give it a go and Tom loved it!”

Brendan is now working with Tom regularly to get him ready for local, regional and interstate competitions as he works towards selection for the team that Brendan will put together to compete at the Special Olympics.

When asked how he feels about working with Brendan, Tom says: “It’s too nice, if I make a mistake he can help me out.”

James adds: “Brendan understands how somebody with a disability needs to learn how to play the game, as opposed to say if I’m learning how to play. It’s good that he has that experience around different ways of learning.”

Along with his golf, Tom maintains a sporting schedule that would make any sports lover jealous.

“Tom and I are together four days a week in the community,” James says.

“Tom surfs on Wednesdays, plays golf Thursdays and Fridays, and on Tuesdays and Saturdays he is having coaching in horse riding, where he is learning dressage skills so that he can ride at shows and do grading. He has ridden in the Bellingen Show in previous years.

Find out how Samil is kicking goals and putting his experience to work on the footy field.

Read about how Pete cycles his way to success.