The power of partnerships for Housing customers 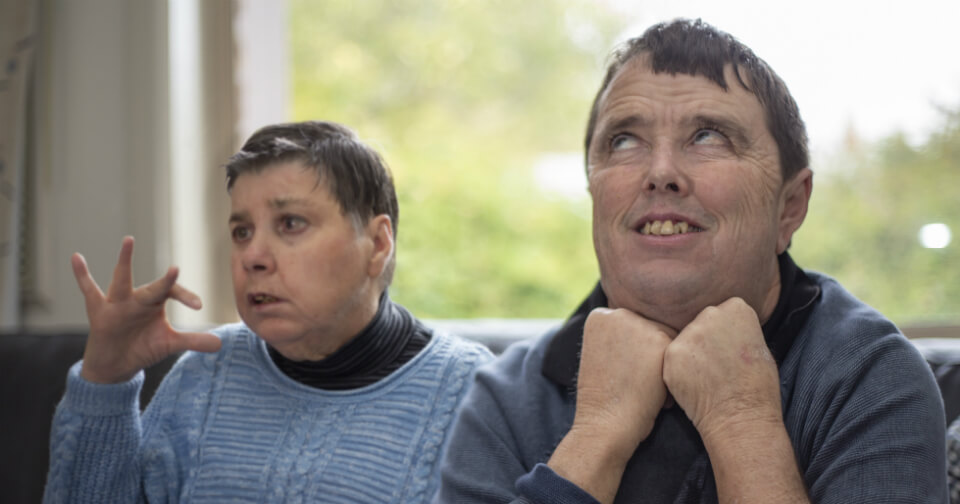 “It’s easy to sit somebody who might be blind and deaf on the couch, but it’s 2019. There are simple things we can do in the home to include Merryn and Travers.”

When Marty from Northcott’s Behaviour Support team called in Vision Australia to assist in our Albury accommodation service, Northcott Service Coordinator Peta McCorry saw first-hand how incremental changes can make a world of difference to a customer.

Merryn and Travers are two of five long-term housemates who have been living together for two decades and transferred to Northcott from the NSW Department of Family & Community Services (FACS) in November 2017. Vision impaired and non-verbal, with an intellectual disability, both Merryn and Travers were institutionalised as young children.

“It was pretty evident that Travers was communicating what he wanted, but as the support team, we weren’t quite aware of what he was advocating,” Peta explains. “Then he was displaying concerning behaviours, so the behaviour support therapist suggested that Travers be reviewed by Vision Australia.”

An occupational therapist specialising in vision loss met with Travers, and then with Merryn, as staff had recognised that she was under-stimulated.

“Merryn was often left sitting on the couch because she appears quite happy there,” Peta says. “But I just thought there’s a bit more to life that she could be doing and exploring.”

The specialist staff had also observed Travers at his day placement service and identified that the primary trigger for his concerning behaviours was that he couldn’t orientate well with his environment. The relatively simple – but life-altering – solution was to introduce a cane into Travers’s life.

“He’s in his forties; it just blows my mind,” Peta adds. Over recent months, the addition of the cane – combined with professional guidance and encouragement – has resulted in less escalation in Travers’s behaviour, plus greater independence and engagement with others.

For Merryn, the involvement of a specialist therapist means she now spends less time on the couch and more time getting involved in the myriad of independent daily tasks that most of us take for granted. Through simple interactions such as hand-over-hand guidance from staff, Merryn is communicating more and learning new skills.

“I think the sense of satisfaction of making her own cups of tea must be great,” Peta adds. “It’s something that she can control, because most of every day is controlled for her. She pretty much bosses people around in the kitchen now!

This story featured in our 2018–Annual Report. Download it here and read more customer stories.

Moving into a villa with Northcott where he could bring a garden to life, and feel part of a community, made a big difference to our customer Craig. Read his story.

Northcott provides a range of accommodation options for people with disability. See our current vacancies.