Promoting communication for all 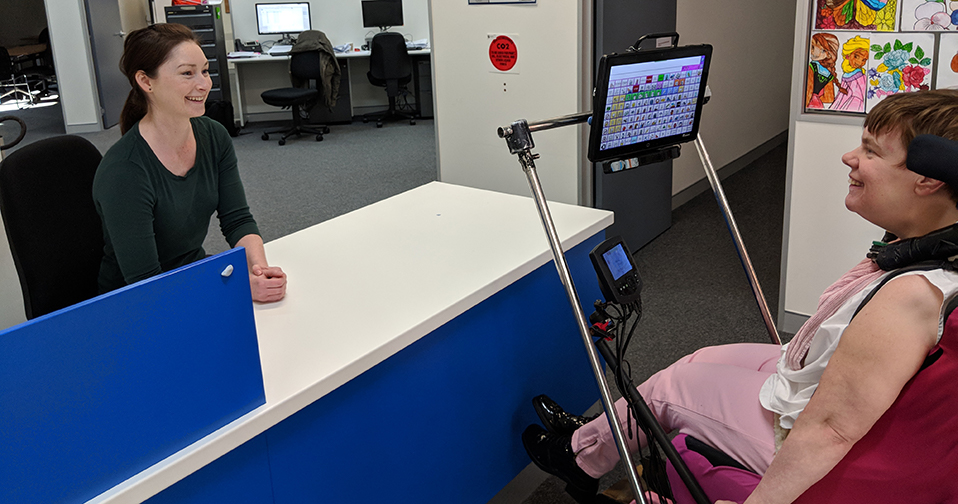 “Communication access is about creating the kind of environment where everyone can get their message across,” said Northcott Speech Pathologist Katrina McNamee.

Katrina is referring to the theory behind the Communication Access Symbol, which was created in 2011 by Victoria-based not-for-profit organisation Scope. The symbol works on the same theory as the highly-recognisable International Symbol of Access – otherwise known as the wheelchair symbol.

“The idea is that when you see the Communication Access Symbol at a business or organisation you can be confident that someone with a communication difficulty will be treated with respect; will be spoken to directly, not spoken to through their carer; and will be listened to,” Katrina said.

“If the person cannot be understood, the staff will have strategies and resources to support them to get their message across.”

In January this year Northcott started rolling out the Communication Access Symbol in NSW after successfully obtaining the tender for the project. The first organisations to get involved are NSW TrainsLink, who are working to obtain the symbol for their Newcastle and Wollongong train lines, and Northcott’s North Parramatta office.

“I have completed a couple of training days with North Parramatta reception and the customer service team to try and teach them strategies that will be useful in person and over the phone when you’re interacting with someone who has a communication difficulty,” Katrina said.

“This is especially important for people who use alternative and augmentative communication (AAC), so I’m also in the process of creating resources that will support those people.”

The project aims to avoid any negative assumptions and mistreatment that people with communication difficulties may experience.

“You can’t always tell if someone has a communication difficulty and lots of people can be judgmental whenever they come across someone that uses an AAC device, or who has speech that’s difficult to understand,” Katrina said.

“Part of having the symbol is making sure that people don’t make those assumptions. It’s getting people to be more aware of the different ways people communicate.”

In her work as a speech pathologist, Katrina has seen many examples of people with communication difficulties avoiding certain situations due to past negative experiences. One particular customer with cerebral palsy was set up with an AAC device but was hesitant to test it out.

“We went along together to a store, he had his communication device ready and was able to use it very well,” Katrina explained.

“I said to him “here’s the sim card that you need, now you can go and buy it yourself”. He said “no, it’s not worth it, it’s not worth the time it takes because people just don’t know how to interact with me”.

“If that customer could have been confident that the person behind the counter would have been able to interact with him, then he would have done it himself and been more independent. That’s what the symbol is really about.”

With more than 200 organisations in Victoria having been awarded the symbol, Katrina is hoping that the project will be just as successful in NSW.

Though the project is still in its early stages, Katrina has had a great response so far from people with disability, including the three Communication Access Accessors that Northcott has employed to ensure organisations are meeting the minimum standards.

“When we had our orientation with these staff members they said they were so excited to be part of a project like this because it’s so important for people who literally don’t have a voice to have more of a ‘voice’ in society,” she said.

Find out how Northcott Speech Pathologist Candice is bringing a creative approach to therapy.

Read more about how assistive technology can empower people to have choice, control and independence.