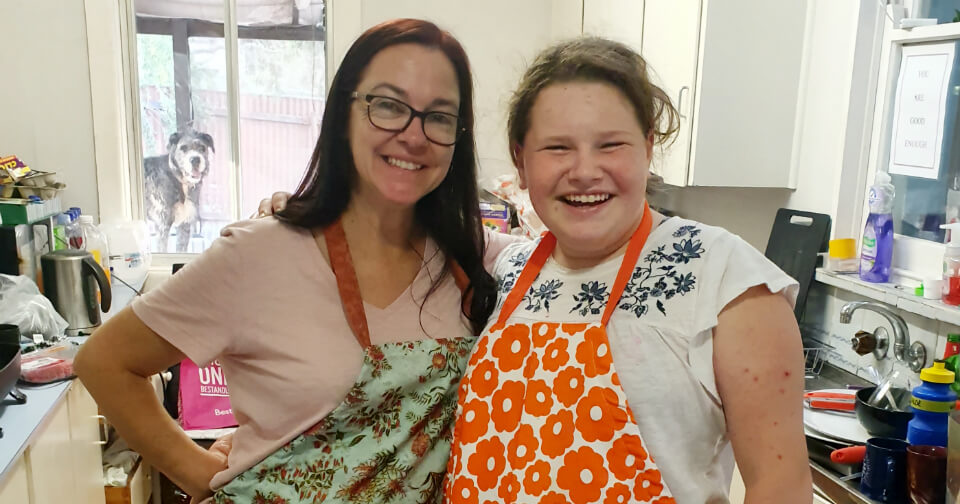 Two hours a week of dedicated one-on-one support from Northcott throughout 2019 – combined with changes at school and access to therapy services – has made a world of difference for 15-year-old Chloe, and her family.

“Chloe was diagnosed with Attention Deficit Hyperactivity Disorder (ADHD) and Oppositional Defiant Disorder (ODD) in kindergarten so we were managing all that, but 2018 was just a horrible year,” Chloe’s mother Amy explains.

Chloe’s school attendance rate dropped to 48%; she wasn’t sleeping; wouldn’t eat properly and meltdowns were a common occurrence. Amy was struggling to manage the situation and support her husband and other young daughter.

Chloe’s teachers suggested “there was more going on”, so she completed an autism diagnostic assessment and was formally diagnosed with autism.

With this diagnosis, Chloe was deemed eligible for the National Disability Insurance Scheme (NDIS). She received funding for her first NDIS plan in late 2018, with goals focussed on developing her independence, building resilience, learning decision-making and taking responsibility. The NDIS plan gave Chloe the funding she needed to access a range of support services, including one-on-one in-home and community support with Northcott in Wollongong.

Northcott Support Worker, Deanne, started working with Chloe developing her cooking and other life skills. As a result of the success of these sessions, Northcott Support Worker, Helen, also started to support Chloe with daily living skills and taking more responsibility of her bedroom and personal items. More recently, Chloe has started receiving support for her involvement with the Illawarra Academy of Sport where she is a recipient of a swimming scholarship.

More than a year on from the start of Chloe’s NDIS plan, Amy couldn’t be happier with Chloe’s progress, and the improvements in her own health and wellbeing. School has improved; Chloe is making friends; her self-esteem is growing; she is more independent and has even started thinking about her future.

“The one-on-one support is great. We’ve gone from having a kid who has refused to do any cooking to one who is now cooking for herself. And cleaning her room! She is much happier and we’re having less meltdowns. She has heaps more confidence, and a belief that she can do things now,” Amy says.

“And I’ve found it very helpful. It takes two hours out of my week when I’m not focussed on Chloe. I can get things done and have some time for myself.”

Amy says gaining knowledge and strategies from Deanne and Helen has been useful for the whole family. Knowing that the Northcott staff will back her up in managing Chloe’s behaviour is also a bonus.

“It’s helped us a lot because we can say: ‘Chloe you know how to do this. We don’t have to stand and watch you do it’,” Amy explains.

Chloe is also recognising changes within herself.

“Some things are a little easier than before. I feel more responsible. And a little bit more confident,” Chloe says.

Chloe is proud of cooking for her family and taking responsibility. A few months ago, when her mother was unwell, Chloe prepared dinner for her father and sister, taking the leftovers to her mum in hospital. It was something Amy says she couldn’t have imagined Chloe was capable of a year ago.

Although Chloe doesn’t always like cooking and tidying her room, she says she finds the time with Deanne and Helen fun.

“Sometimes Helen will take me to the movies or we will go to Flip Out or bowling. I do more of the fun things with Helen and all the cooking with Deanne.”

As 2020 kicks into gear, Amy says the family plans to continue Chloe’s one-on-one support sessions with Helen and Deanne. The cooking sessions will become a little more challenging and Chloe will be supported to take even more responsibility around the home. The future is bright.

“I always thought Chloe had a good future in front of her, but she just didn’t have access to services to better that future. Now we have the services. She may not get a proper job like you or I could get, but she’s quite a talented kid. She’s gaining skills to be able to get one step closer to reaching a mainstream workforce job, more than where we were before.”

Interesting in being a support worker? Check out our job vacancies.