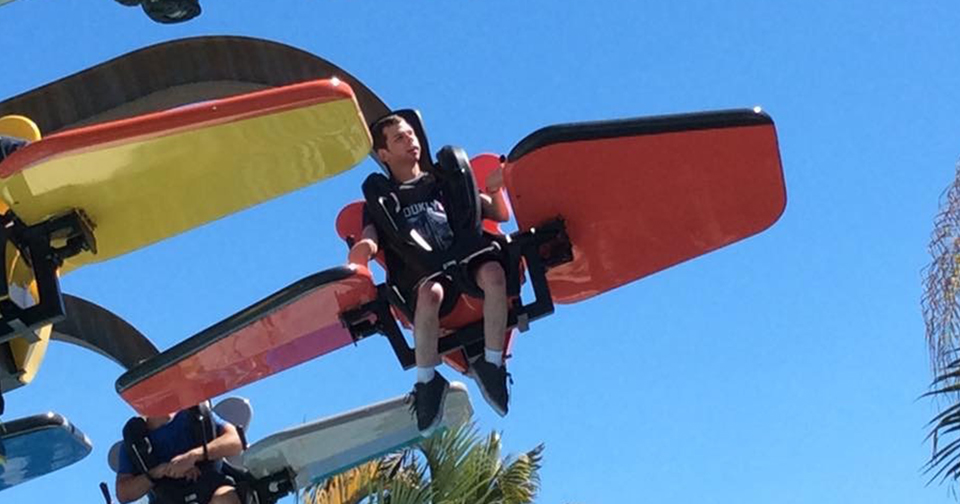 Sydney-based Northcott customer Travis Bellamy like many other twenty-somethings wants to live life to the fullest, enjoy new experiences and have some fun. As part of his NDIS goal to develop everyday life skills and become more independent, Travis developed a plan and organised a trip to visit his sister in Queensland.

He developed a budget that included his expenses and savings, researching accommodation prices, accessible activities, support worker rates and then developed a plan on what he wanted to do and where he would stay. Part of this was to visit some theme parks on the Gold Coast.

In this recount of his trip to the theme parks, Travis not only talks about achieving his aim of having a great holiday, but also raises a few of the issues about how theme parks approach customer service and meeting the needs of people with disability.

“I love Queensland theme parks. I have done so ever since I visited them as a kid. So I was beyond excited when I got to visit four of them recently.

Most people love theme parks and are crazy about going on the rides like me. But as I’ve got cerebral palsy and use a wheelchair to get around I have to see a nurse for a ride assessment to find out which rides I could go on and which I couldn’t.

Last month I went on a holiday of a lifetime and choose two great support workers, Amiel and Mitch, to go with me. Our first theme park was Dream World, and the first ride was the Dodgems – me and Amiel in one car chasing and ramming into Mitch in another car. It was so much fun we did it again!  I also went on the Plane ride, which was the first time I‘ve ever been up-side down. Because it was so much fun I went on the ride twice before having lunch. I went on three more rides before leaving.  First was a motorcycle ride, can’t remember the proper name of it but it was extremely fast and lots of fun. One second you’re not moving, then the next thing you know the g-force is pushing you back in the seat. It was all over in under a minute, but it was great.

We went on The Claw next, which was quite fun yet scary. It’s like a big swing or pendulum, only the seats spin around and around, backward and forwards, as The Claw goes higher and higher with each swing.

Now the last ride was a doozy, and I must say that both Mitch and Amiel advised me not to go on it, but I did!  I’m sorry to say the Big Drop was probably the stupidest thing I have ever done in my life.

On the Big Drop you sit in a seat that lifts you hundreds of feet above the ground so you have a lovely view of the park. I remember admiring the view and then the fear started creeping in, getting stronger and stronger as every second passed…wondering when the big drop was going to happen?  I can’t tell you what was going through my mind as we dropped, but I said ‘no’ to the lady at the bottom who asked us if we wanted to go again.

To prepare for Movie World we went to see the new It movie. Another day, another theme park, another ride assessment! I liked the lady doing this one. She directed the questions at all of us instead of just asking the support workers. She asked me if I had mobility in my legs, had core strength and a couple of other questions before putting an orange band around my wrist which told ride operators which rides I could and couldn’t go on.

As a kid I went to Movie World and my favourite ride was Scooby Doo Spooky Coaster because it was all dark and scary which added to the excitement! Scooby Doo was still there and it didn’t disappoint. The best and the scariest part is when the car you are in reverses into a room which then lifts up and up. When the car stops going up it then goes backwards down a hill getting faster and faster. Definitely my favourite ride so far!

My last ride was the Superman roller coaster. When I got on the ride I felt nervous, yet excited. It was slow at first then stopped for a second while Superman talked about something. When the ride restarted I felt like I was getting pushed back in my seat, I was screaming not in fear but in laughter. I was laughing because I was enjoying the ride and I was having the best holiday of my life.