Tales from Two: Shane and Johan 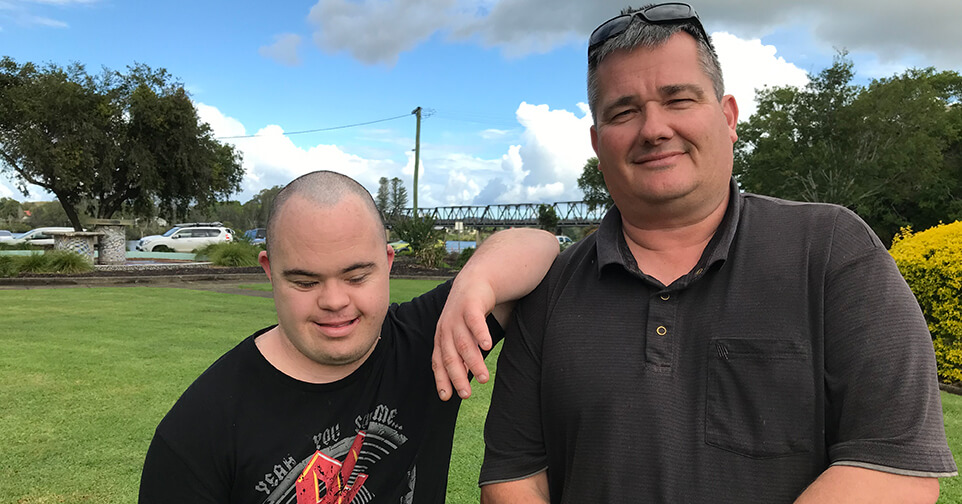 What do you get when you cross a dancing and singing Michael Jackson fan with a sports-mad Dutch joker? A friendship so unpredictable it can’t be summarised simply. In this Tales from Two story, our Taree customer, Shane Zammit and his support worker, Johan Kloosterhof, share what makes their bond so special.

Shane: When I first met Johan I thought he was fine. I was never nervous with him. I was actually excited to meet someone new. I noticed that he spoke with an accent, so I asked him why he spoke like this. He explained that he is Dutch and his parents are Dutch.

Johan and I do a lot of mucking around, laughing and joking. He teaches and tells me stories from Holland about his parents. I’m interested in Johan. He loves watching sport, like soccer. Johan also helps me with my busking by taking me to Forster and Taree where he watches me and helps monitor my diabetes. He helps me set up [for busking]. He books the places in Forster and Taree with the local councils and also helps me brainstorm ideas [for performances].

At Northcott, I like all the different support workers because I can learn different things. I also get to do really creative stuff like making my own music videos and playing musical instruments. I love music and Friday Karaoke wind down. I make some good things at the Men’s Shed and I get to practise my ten pin bowling for when I play with my family.

I like Johan because he’s great to just hang with. He looks out for me and teaches me what’s right and wrong. He helps me with my diabetes and helps me to make better and healthy dietary options, which is good for me so I don’t get “lows”.

I also like the other staff at Northcott a lot. I really like the way the support workers care about me and everyone else at the centre. One time I actually cried because they are so fantastic.

Johan likes to have fun. He likes to dress up and entertain everyone at the Everyday Life Skills Centre by doing tricks. He’s clever and creative, caring and interested in everyone. Everyone needs a support worker like Johan.

Johan: I have been supporting Shane for approximately 12 months now. When I first met him, I thought he was a bit of a drama queen. I thought, “how do I work with this!” However over time, we have developed such a great relationship. Shane knows when it’s ok to be a drama queen and we have great fun together.

On our first shift together I just took it easy and took the time to find out about Shane, what he likes and doesn’t like. We basically watched YouTube about Michael Jackson as Shane loves Michael Jackson. He studies his dance manoeuvres for his own busking performances.

Shane’s personality is perfect for the stage. He loves to sing and dance. He is very confident when he is performing, such as when he is busking, and he thrives on getting good feedback – but don’t we all?  I love it when Shane gives me good feedback too!

We also love to muck around and have fun together. I see how embarrassed Shane gets when I am silly in public and he starts laughing.

I support Shane with a whole variety of things, such as busking in Forster and Taree, his social and money skills and learning about his diabetes. I also teach Shane there are more artists than Michael Jackson, with all due respect, to broaden his interests. Shane just got engaged and loves his fiancée Kelly so I’m also teaching him how important it is to respect females and Kelly, and what makes a relationship healthy. I’m supporting Shane to learn about rights and responsibilities and how to get on with others.

This year we’re focussing on his social and money skills. We are also focussed on further developing and improving his busking. Shane’s busking is like a gift to the community. I love seeing how people respond to his busking with their smiles and happiness when they are watching him.

Shane had been to a number of other organisations and there just always seemed to be a hiccup. At Northcott, he has moved forward and is a much happier person who contributes.

I love how much happier and more confident Shane is now compared to the first time we met. He is less aggressive and can control his temper much better. He has insight and understanding towards others. He is quite a different person and I truly respect him for this.

Want to read more heartwarming Tales from Two stories? Find out about Ben and Sue, Mia and Zenna or Richard and Duncan.