Tales from two: Ben and Sue 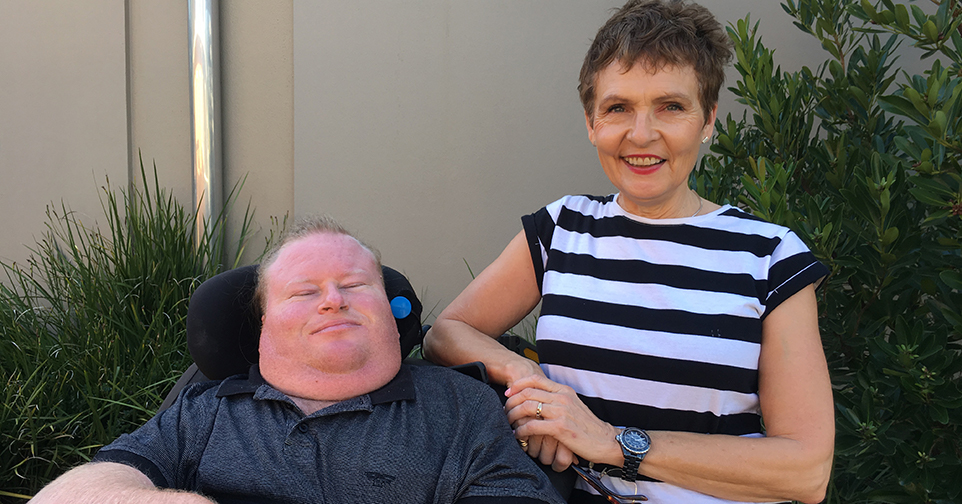 They may seem like an unlikely match, but after more than 10 years working together as customer and support worker, and later Northcott Parramatta colleagues, Ben and Sue have become firm friends. From their friendly banter to enthusiastic debates about sport and food, their friendship is one of a kind.

Sue: When I think of Ben I smile.

I first met Ben in November 2007 when he came to Parramatta Life Skills, then called Community Participation Program, for a visit prior to graduating from high school. I clearly remember saying to the support worker sitting next to me: “I think that guy over there is a bit of a character.” I’m happy to say, I wasn’t wrong J.

My first shift with Ben was a ‘community access’ shift – that’s what Rec was called back then. We went to Coogee and the journey began!

Over the years I’ve supported Ben in the Life Skills group program, and, for the past two and a half years, as his assistant in his role as Northcott’s Inclusive Workplace Officer. At the moment I usually work two days a week with Ben.

We’ve spent a lot of time laughing, having robust  exchanges of opinions (arguing), working on filming, singing (I’m the person who shouldn’t sing but does), trying to get sponsors for various events at Northcott, playing sport, talking about sport (defending England’s soccer and cricket teams), attending presentations at universities and TAFE, shopping, cooking and eating.

Since I’ve been working as Ben’s assistant, we’ve been to corporate events where Ben has presented, or been the guest speaker. We’ve attended information sessions for public events – for example VIVID, where Ben’s input was sought. We’ve been to training sessions for corporate partners and induction sessions at Northcott’s Head Office and regional locations. We’ve even had study days together.

Above all, we’ve laughed a lot and had many robust discussions – particularly about where to have lunch!

I can’t identify my most enjoyable memory with Ben…there have been so many. Quite simply, every day is different.

I’ve learnt that Ben is a great teacher and very patient. I knew he was a great facilitator before I started in this job, but he has great skills at getting the best out of people.

I think my relationship with Ben works for a few reasons. We seem to quite like each other (J) and we like spending time together. We share a sense of humour. We like talking about sport, spies and food.  And we like finding out about things (i.e. we’re both nosey)!

I never knew or thought that my journey with Northcott would follow the many paths that it has. When I first met Ben 11-and-a-half years ago, I never imagined I’d be writing comments for an article like this. I feel lucky to have had all these experiences and learning opportunities, and most important of all, to have Ben as part of my life J!

Ben: The first time Sue did a shift with me was when I was a new customer at the Centre Based Life Skills program. One of my first thoughts or memories of her was that she was a massive goof with very perky teeth.

These days Sue supports me two days a week in my role as a Northcott’s Inclusive Workplace Officer. This includes supporting me with everything from feeding, writing emails, trying to use the computer, preparing training workshops, etc.

There are way too many memorable shifts with Sue to list. One that does stand out however is when Sue was driving me somewhere and trying to reverse the van down a driveway. She was getting quite “flustered” in her words. I thought it was a good idea to ask her if she could please turn up the radio. She replied in her booming British voice, “Not now Ben”. It was probably the only time ever that I pushed her buttons – haha!

From Sue, I’ve learnt a lot of patience; to not take myself or life too seriously; to enjoy life; and do what you are passionate about.

I think my relationship with Sue works so well probably because we are both weirdos with very wild senses of humour. Also, we just really enjoy each other’s company and both get a lot out of it.

When I think of Sue, I think hilarious, awkward, embarrassing (in a good way), loving, loyal, full of energy, bubbly, always down for a joke, and most importantly, one of the most supportive friends I’ve ever had.

Read more stories from our Tales from Two series: Richard and Duncan or Mohammed and Alicia.

Interested in being a support worker?  Read Sue’s experience.