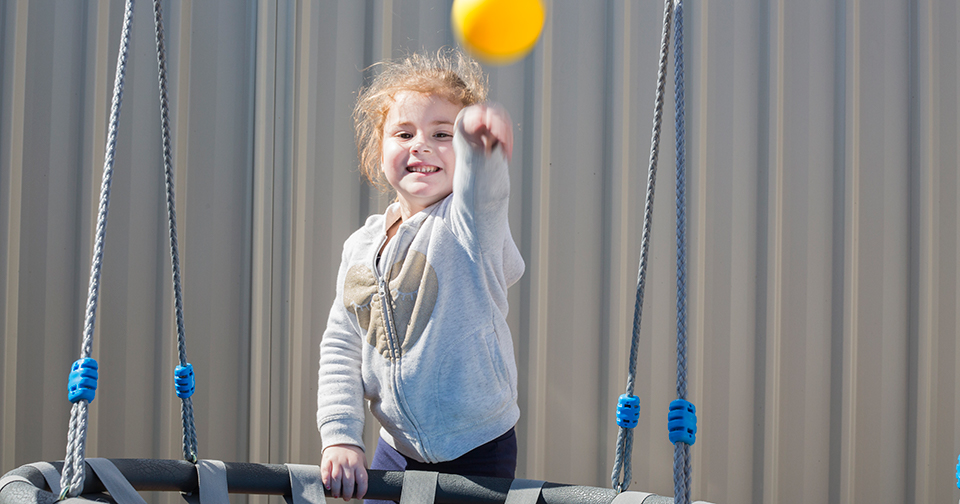 “I couldn’t do most of what I’ve done with Maddison without Natasha from Northcott. She’s a world of information. She’s made such an effort to find more resources for me, and to get me referred to other services to help Maddison,” says Joanne, a Northcott customer in Tamworth.

“Maddison is very, very active, and also very loving. But she can go from being the loveliest girl in the world to bashing on windows and doors,” Joanne says.

After suffering a stroke in early 2017, Joanne was referred to Northcott’s Early Links program by Tamworth Family Services and started seeking support from Natasha who is now working in our Early Childhood Early Intervention team.

Natasha linked Joanne with information and other services to support Maddison’s development. Together, they are now working on transitioning Maddison through the Early Childhood Early Invention pathway of the National Disability Insurance Scheme to get her ready for school in 2020.

“I’ve been trying to get in place early intervention services that will support Maddison to prepare for school,” explains Natasha, adding that her role has included making phone calls on Joanne’s behalf, writing letters and emails, requesting information from clinicians and liaising with other services.

Joanne says that without Natasha’s support she wouldn’t know what to do. “I was finding that Maddison is on the cusp of everything. She doesn’t quite make the grade for a lot of services,” Joanne says.

“Natasha has been getting things clarified for me, and talking to other professionals on my behalf. That makes a huge difference, particularly because she knows Maddison and she sees firsthand what goes on. I now know that Maddison is on her way to be getting help. And that’s all that I want.”

Joanne says that since receiving support and guidance from Natasha and Northcott, things for the family have improved.

“Maddison’s meltdowns are not as consistent. When we do get one, they are bigger but now they are only once a fortnight or once a month. Our services are also talking to each other a little bit more, and providing reports and information so they can be shared with Maddison’s day care centre and paediatrician. It’s a massive shift to be able to be heard and feel respected as a parent,” Joanne says.

“I now know there’s a future for Maddison. We’ve got things in place to get to where we need her to be.”

Find out what it means for Northcott to be a Partner in the Community delivering Early Childhood Early Intervention (ECEI) services.

This story was published in Northcott’s 2017–18 Annual Report – download it to read more customer stories.