Human rights at the end of the Mardi Gras rainbow 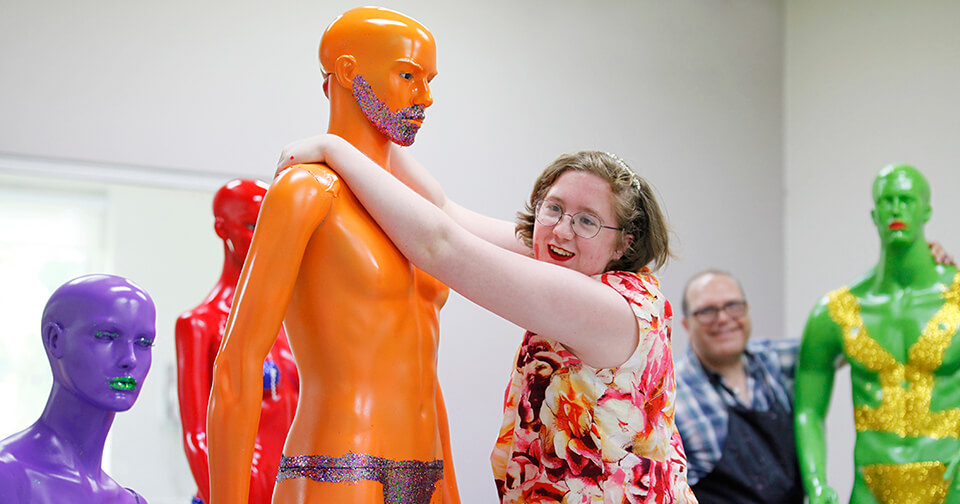 Glitter is in the air, everywhere we look around.

Well, it is when it’s Mardi Gras float building day.

This year Northcott, People with Disability Australia and Creativity Inc. have joined forces to spread the message of disability rights and sexuality. Everyone has been busy decorating mannequins and signs with colourful glitter and paints for our parade float in the lead up to the 2020 Sydney Gay and Lesbian Mardi Gras.

Northcott Coordinator for Sexuality and Relationship Education Alicia Melita says it is so important for the general public to be aware that people with disability have needs like everyone else, including sexual needs.

“It’s not often spoken about and it tends to be a taboo subject, so we really wanted to highlight that to bring it to the front of everyone’s minds,” Alicia says.

“There’s  going to be six mannequins on the back of our truck and each will be a different colour of the rainbow representing a different sexuality related human right.”

Chelsea Peterson  jumped at the chance to be involved with decorating the 2020 float, because she believes the Mardi Gras Parade is a great opportunity to have her rights talked about openly.

“We’re human. If people don’t think people with disability have rights, then they may as well not have rights themselves,” she says.

“People with disability want to be part of the community and they have rights to be educated around sexuality. And also to be free from abuse and neglect.

“I think it’s very important that we all come together to celebrate Mardi Gras, but also celebrate people with disability and their rights.”

Come along and cheer us on at the 2020 Sydney Gay and Lesbian Mardi Gras Parade on Saturday 29 February.

Our float is supported by Google Mardi Gras Parade Grants.

Northcott were all aboard the Fearless Express at Mardi Gras 2019.