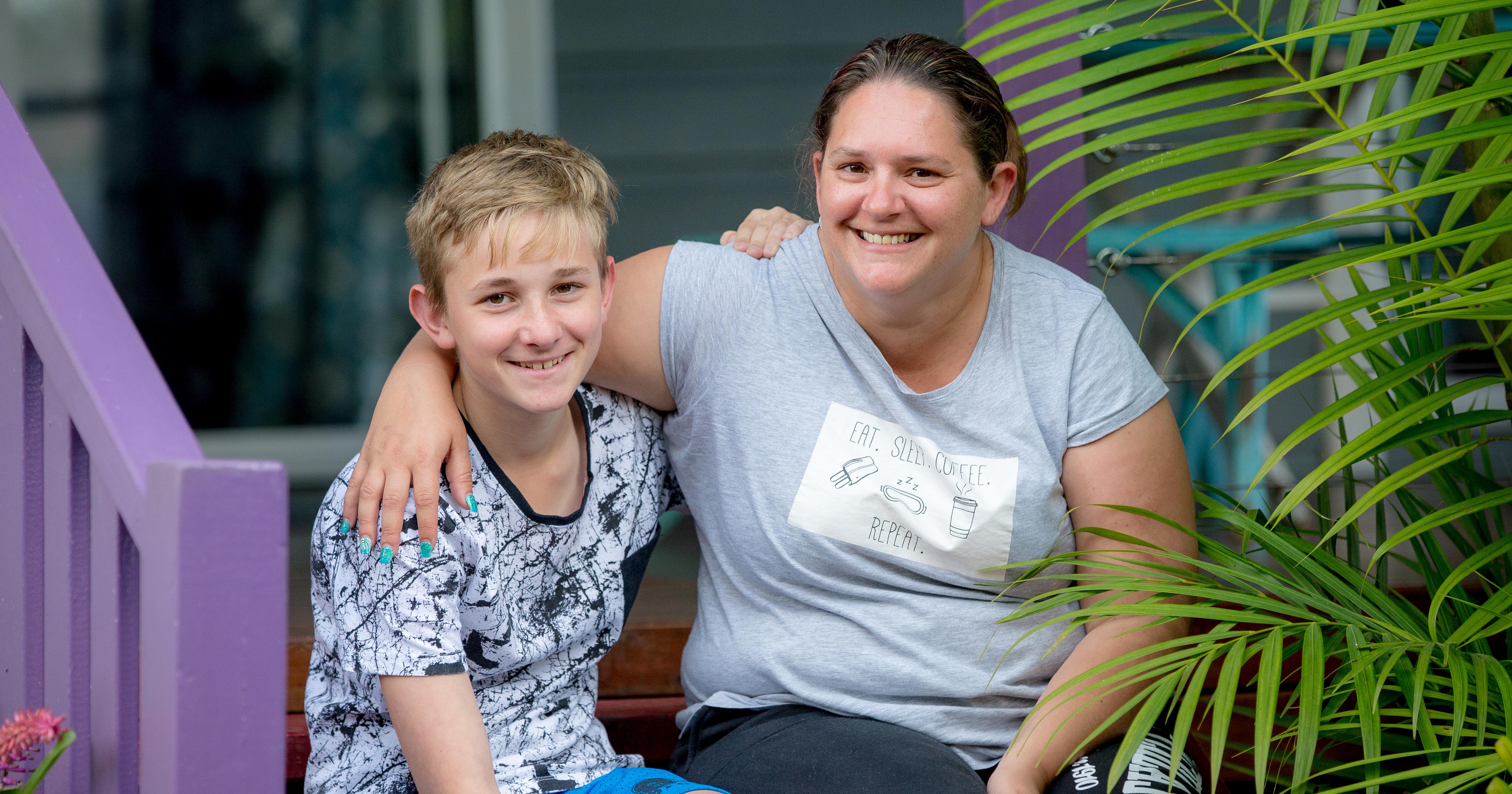 Lachlan and his mother Kaela worked with a Northcott behaviour practitioner to put strategies in place to manage Lachlan’s Autism.

Autism Spectrum Disorder, or ASD, is a medical label given to people who may experience the world differently because their brain is ‘wired’ a certain way. This ‘neurodiversity’ is seen by many people with ASD as a strength.

When Kaela’s 11-year-old son Lachie was diagnosed with ASD, she felt relief. “I was relieved there was a reason that he behaved like he did; it wasn’t just him being naughty. He wasn’t just trying to make our lives difficult,” Kaela explained.

Kaela had concerns about Lachie when he was as young as 13 months because he used to head-butt concrete, but at the time, doctors simply told her it was because he was a toddler.

“It was only when my daughter was diagnosed with ASD that I noted a lot things were the same with him,” Kaela said.

Now, five of Kaela’s six children have been diagnosed with ASD.

“My daughter was the first one (to get diagnosed) and then we spoke to the psychologist because there were lots of things I noticed with the other children so we got them assessed too.”

“Before we knew Lachlan had ASD, it was quite hard because we had nobody we could speak to about it that could give us ways to help deal with it, or support us.”

Kaela explained that Lachlan would run away, be physically abusive to his father, have meltdowns or try and hurt himself.

Following a referral to Northcott, Kaela and Lachlan have been working with Behaviour Therapist Michelle for around 18 months and together they have put a number of strategies in place to support Lachlan, but also his siblings.

The family use visual charts for all of the children to support morning and afternoon routines. Lachlan and his brother and sisters check the charts and now know what they need to do, making the household of eight far less chaotic.

“Michelle also made up some visual cards for Lachlan for his ‘happy places’ and a list of things he can do when gets worked up,” Kaela said. “So he can get something to help him and just go off and calm himself down away from everyone,” Kaela explained.

“Before working with Northcott, Lachlan would have meltdowns on a daily basis, but now has them only every now and then”, Kaela said. “It’s made a big difference,” she added.

Monday 2 April is World Autism Awareness Day. In Australia, it’s estimated that one in 100 people have been diagnosed with ASD – which is almost 230,000 Australians – an incredibly large number for a disability that was once considered rare.

Understanding more about ASD can help us all to support people with ASD. Acceptance is key. We spoke to Northcott’s Centre-Based Coordinator, Vickie Irwin, for some tips about what to recognise with people with ASD and how to work with them.

Common behaviours of people with ASD

Visual – staring at lights, blinking, gazing at fingers, staring at the corners of ceiling

Tips from a person with ASD

1. Keep to my routine as much as possible.

2. If I get upset, as my support person, please stay calm and keep a normal tone of voice. Ask me “How can I help you right now?” and give me time to process what I want to say.

3. Never touch me when I am anxious.

4. I may engage in repetitive behaviour. This is usually something I need to do in order to find peace in my world. If I’m causing myself harm, this is an indication of my raised anxiety levels, try to redirect my attention (without touching me) onto a topic or activity that I enjoy.

5. My mind is usually bursting with questions and information. Give me your full attention and time to say what is on my mind, then I am more likely to start my daily routine.

6. If you incorporate my ‘special interests’ as a tool when learning new things, I am more likely to engage in an activity.

7. I am always trying to learn and fit into a world that is so confusing. This is exhausting and I find I am better at learning in the mornings rather than afternoons. Some days it is just all too hard and I may have a bad day or even a meltdown!

Ever since he was a child, Michael, who has autism, has been passionate about gardening and photography. With Northcott’s support, the 22-year-old has followed his passions and landed a job.

Patrick Muscat is 20 years old and went straight from Year 12 to Northcott’s two-year Transition to Work program in Casula in 2014. He has Autism Spectrum Disorder.