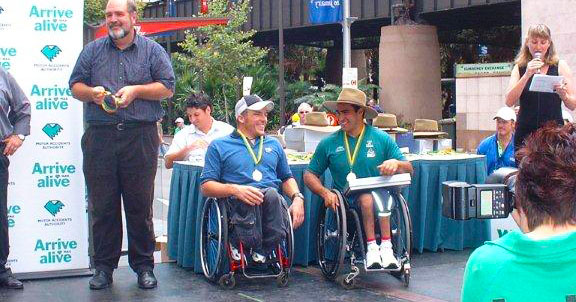 Our former customer and Paralympian Kurt Fearnley (left) at the presentation for the Oz Day 10K wheelchair race in 2004. Photo from Northcott Archives.

The 2018 Commonwealth Games kick off on the Gold Coast today, Wednesday 4 April. We’re particularly excited about the integrated Para-Sport Program which is being touted as the largest in Commonwealth Games history. Up to 300 para-athletes are set to compete in 38 medal events across seven sports with these competitions interspersed with events for able-bodied athletes.

This quick guide should help you learn more about the Para-Sport Program so you can choose the events and athletes to follow.

The table below details each event in the seven sports and the days on which these events are running. Check the links for the time and date, but remember the Para-Sport Program is fully integrated into the Games Schedule so it can be hard to find the exact time for the para-sport event.

NB – In case you’re wondering about the meaning of codes such as T54, T38, B2/B3, TT10, PT1, etc… – these are universal classifications for para-sports which determine the eligibility of athletes.

Australia’s Commonwealth Games Team includes 61 para-athletes so there will be lots of action to follow.

We will be watching five-time Paralympian Kurt Fearnley, who is a former Northcott customer and an Ambassador for GC2018. Kurt will be competing in the 1500m track event (Monday 9 April, 12pm) and the T54 wheelchair marathon (6:10am, Sunday 15 April), which will be the first ever wheelchair marathon event at the Commonwealth Games.

Other Para-Sport athletes and teams to watch include:

Channel 7 is Australia’s official broadcaster for the GC2018. You will be able to follow all the action live on television, online or through 7’s Commonwealth Games app – 7CommGames (available from the App Store).

As GC2018 is an inclusive and fully integrated sporting event, the opening and closing ceremonies will feature all athletes. The para-sport athletes will march alongside their able-bodied team mates at both ceremonies.

Are you watching some winning athletes and now feel inspired to get active – check out our guide to winter sports for children with disability.