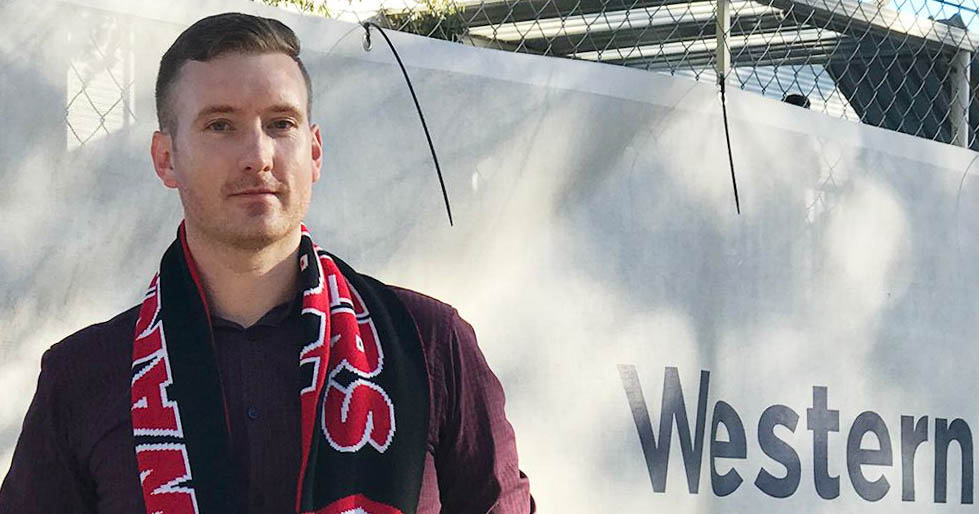 Amongst those football-mad staffers is Work Health and Safety Officer Logan Drury. Logan is the coach of the Western Sydney Wanderers Powerchair team – which includes several Northcott staff members and customers – so we thought we’d embrace football-fever and catch up with Logan to get the lowdown on the fast and furious world of powerchair football.

What is powerchair football?

Powerchair football is a form of football played using electric wheelchairs. There are four players on the field at once including the goalkeeper. Actually, the best way to better understand what the game is all about is to come along and watch a match and support the team.

Can you tell us a bit about the team you coach?

I coach the Western Sydney Wanderers team in the NSW Premier League. The team won the championship last year and is made up of players who have been playing for many years, to players who are just starting out. Our team also includes Northcott customers, as well as two Northcott staff members; Andy Waite and Ben Keyte.

What made you want to coach a powerchair football team?

I am a huge football (and Wanderers) fan, and have been following this team since November 2016. When the opportunity came up to become head coach I took it straight away.

When and where do you play?

We play Sunday afternoons at Valentine Sports Park in Glenwood.

How is the team going this year?

The team is going through a transitional phase and has been struggling in comparison to last season. We are looking forward to an excellent second half of the season.

What’s the process like coaching a powerchair team as an able-bodied person?

There is nothing inherently different about the process. I don’t treat the players any differently and they don’t treat me any differently either. The only point of difference is the fact that I can talk tactics and strategies, but I don’t have the actual skillset or ability myself to play the sport.

How can people get involved in powerchair football?

There is a rating system which means that it isn’t as simple as jumping in a powerchair and learning the sport – you have to use a powerchair for daily mobility. But anyone can come along and support the sport, and hopefully barrack for the Western Sydney Wanderers Powerchair team.

Who are you supporting in the World Cup?

I am supporting Australia (who has since been knocked out) first and foremost, and will support the underdogs in each match from here on out.

Anything else you’d like to say about your role?

I am really honoured to be the coach of this team, and regardless of results I am proud to be involved with the Western Sydney Wanderers Powerchair team and look forward to seeing some more faces at games. Come on you Wanderers!

To find out more about the Western Sydney Wanderers Powerchair team check out this video or follow the team on Facebook. To see powerchair football in action click here.

Read about Northcott staffer Joshua Toohey, who was selected to coach the Commonwealth All Stars Physical Disability Rugby League Team.