My connection to the world 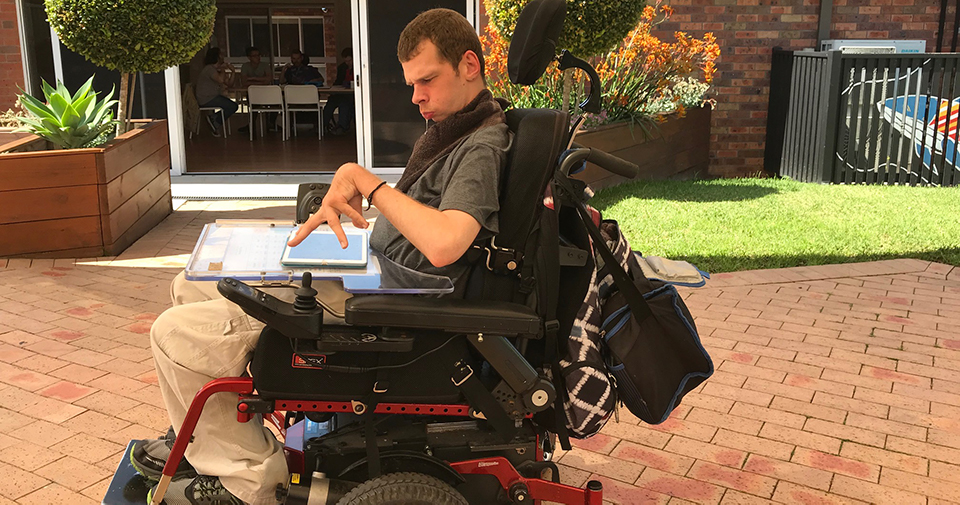 Many of us take our connection to the digital world for granted, but for people with disability, mobile phones and smart devices can give them added choice, control and a new means of communication.

Northcott customer Travis Bellamy shares his story about how technology has transformed his daily routines and provided him with a strong connection to the outside world.

We often hear negative things about social media and the technology we use, but there are big advantages from using them – especially if you have a disability like me.

My name is Travis, I’m 25-years-old and I have cerebral palsy.

When I was 16-years-old I got my Facebook account. Unfortunately at this time we were still two years away from transitioning into a world where all of our technology is touch screen. For those couple of years while the world transitioned into the age of the devices we have today, I had to depend on people to help me access the internet which was very annoying because I had to wait until people were ready.

When I first saw the iPad on TV I thought, “I could do that myself,” but at that time I couldn’t afford one. It wasn’t until 2013 that I actually tried using one, as fewer people were using desktop computers.

The first time that I ever used an iPad it took me about four hours to log in. I knew it would take a long time but it was still a huge accomplishment to me because I never thought that I would be able to do it. It was really difficult and frustrating because with my cerebral palsy my hands don’t listen to my brain which was really annoying.

Over the following months I practiced logging on to Facebook and after a month it only took about two hours which made me ecstatic. Later that year I told my mum I wanted an iPad and when I got one my life literally changed. Now, I basically do everything myself.

Since getting the iPad I have built a better relationship with my family and friends. In fact, because of the iPad I’m communicating with friends who I haven’t seen in years which is amazing!

Technology can’t fix our life, but it can improve it. Even if it only means being able to speak to your family independently, that’s a huge accomplishment.

Read more about how assistive technology can empower people to have choice, control and independence.