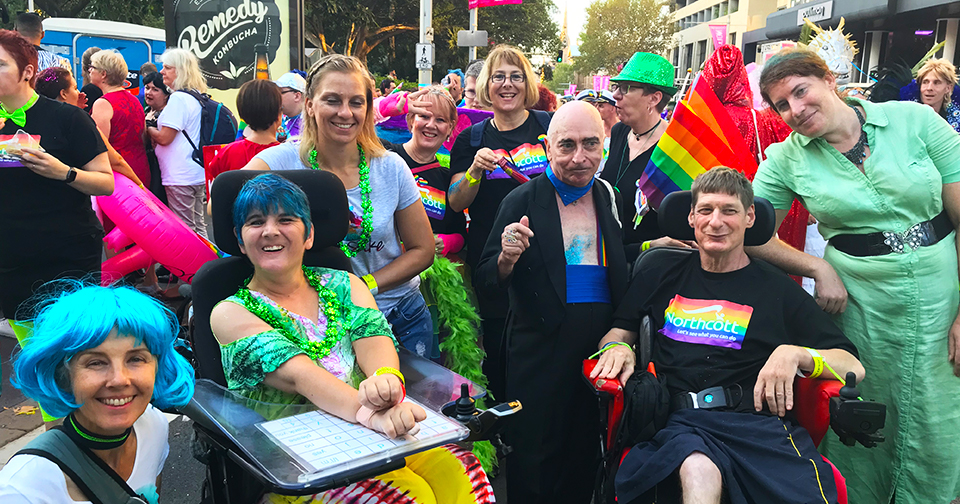 With a 40th anniversary, the legalisation of same sex marriage and a guest appearance by Cher, this year’s Mardi Gras parade was one of the biggest, and most glitter-filled, celebrations yet!

Northcott customers and staff joined the fun as part of the ‘Evolution to Inclusion’ float alongside People with Disability Australia, Cerebral Palsy Alliance and the National Disability Insurance Agency.

To get the lowdown on the event, and the importance of Northcott’s involvement in Mardi Gras, we spoke to Northcott Sexuality and Relationships Coordinator Alicia Melita and Northcott customer, Inclusive Practice Advisor, and Mardi Gras attendee, Sevinc MacCue.

Northcott has been participating in the Mardi Gras parade since 2014, why is this involvement so important?

Sevinc: Northcott’s involvement in the Mardi Gras parade is important because it shows that people who have disability, as well as those that identify with the LGBTIQ+ community, are all people, we’re all the same.

Alicia: Northcott’s involvement in the Mardi Gras parade is more than just an excuse for a fun night partying, dancing and getting covered in glitter – although that is a bonus! Being in the parade is a great opportunity to show that not only is our organisation a LGBTIQ+ inclusive and accepting space, but that we’re also actively supporting our LGBTIQ+ customers and staff.

The parade also allows us the opportunity to march with customers and staff from People with Disability Australia, Cerebral Palsy Alliance and the National Disability Insurance Agency – which I think is so awesome! It’s one of the only events where we get to work collaboratively on a project for a common goal.

Caption: The ‘Evolution to Inclusion’ float

How does Mardi Gras fit into Northcott’s focus on creating a more inclusive society?

Sevinc: Mardi Gras brings customers and staff members from Northcott together for the same reason, to celebrate the LGBTIQ+ community.

Alicia: The key message of Mardi Gras is to promote the message of diversity and acceptance. Mardi Gras fits really well within our focus of creating an inclusive society, where people can live the life they choose. I think that is really important to highlight that Northcott’s involvement in the Mardi Gras not only supports, but also encourages, people to live the life THEY choose.

Why is it important to see representation of people with disability within the LBGTIQ+ community?

Sevinc: It’s important so that both people with disability and the LGBTIQ+ community can show support to each other.

What kind of feedback have you had from people about Northcott’s involvement in Mardi Gras?

Alicia:  I’ve heard staff and customers say they have felt proud to be working for, or receiving services from, an organisation that supports the LGBTIQ+ community – a community which most definitely includes our staff and customers. I’ve also heard from some customers that have said that Northcott’s involvement in the Mardi Gras has influenced their decision to choose or stay with Northcott as a service provider.

I’m really proud of Northcott’s involvement in the Mardi Gras parade and how supportive our management and board are of the event.

It looks like such a fun event! What do customers get out of the experience?

Sevinc: Just being in the environment – there is such a good, fun party vibe!

Alicia: Mardi Gras is an intensively overwhelming experience – especially if it’s a person’s first time at the parade. There are people everywhere, glitter getting thrown around, people building their floats, music being tested, people chatting and taking photos with each other.

Everyone is there for the same reason – where else do you get to dance and get covered in glitter alongside other customers, staff, board members and people from other organisations?!

What would you say to people who might want to get involved but are a little unsure?

Alicia:  It’s okay to be a bit nervous and unsure; we’re here to support you. Please don’t hesitate to ask us questions and let us know how we can assist you to get involved – no matter how big the request!

What other relationship and sexuality services does Northcott offer?

Check out our chat with ‘Evolution to Inclusion’ float ambassador, award-winning actor, filmmaker and dancer with disability, Daniel Monks.