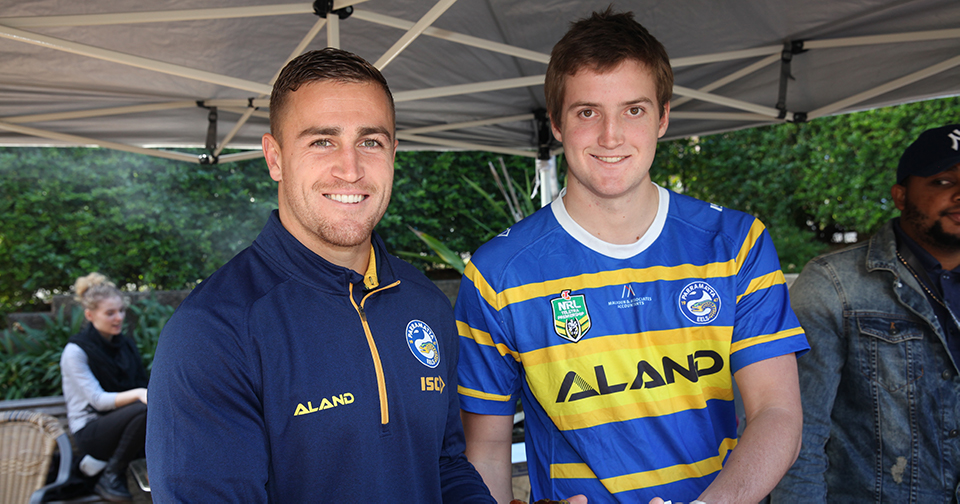 Though the boy from Wagga could easily have let these setbacks get the best of him, he has made the most of the downtime by pursuing one of his other passions — giving back to the community.

This time round Cameron’s community work will bring a smile to the faces of people with disability as he takes on the role of Northcott’s newest ambassador.

After learning of the recent charity partnership between Northcott and the Parramatta Eels, Cameron was the first to express interest in the ambassador role.

“When the opportunity came up I grabbed it with both hands,” Cameron said.

“I’ve done plenty of work over the years with organisations and community groups, but this partnership is really exciting.”

Creating partnerships with sporting organisations like the Eels allows Northcott to raise its profile and provides a great opportunity for customers to spend time with their sporting heroes.

Though the partnership has a range of benefits for both organisations, for Cameron it is the personal fulfilment that’s most rewarding.

“I genuinely love to give back and see the smiles on faces and just being here at Northcott is pretty satisfying for me,” he said.

“I know the customers get a lot out of it, but I probably get even more out of it than they do.

“At the end of the day the football side of it is such a small part of what we do. We’re on the field for 80 minutes a week and that’s it. I think the community side is just as important and we’re in a pretty lucky position to be able to give back to organisations like Northcott.”

On Wednesday 9 May Cameron undertook his first duties as ambassador, with a tour of Northcott’s Parramatta office, including a visit to Northcott Equipment Services, and a meet and greet with customers from Life Skills and Vocational Skills.

Yesterday Cameron returned to Northcott, donning an apron and picking up the tongs to assist Life Skills with their BBQ fundraiser.

With his passion for community work already clearly on display, there’s no doubt the local resident will become a familiar face to Northcott Parramatta customers.

“There’s lot of footy fans and Eels fans here so I’m sure they’ll be giving me plenty of tips and advice whenever I stop by,” Cameron laughed.

A range of charity events are already in the works, including an upcoming Charity Game Day, which will be held on Friday 18 May at ANZ Stadium at Sydney Olympic Park. Funds will be raised for Northcott with the help of 50-50 Charity Raffle.

“Hopefully we can get as many people to the game as possible and get some of the Northcott customers into the sheds after the game when we win.”

For more information on the Charity Game Day visit our Events page. To show your support for Northcott, head to the 50-50 Charity Raffle page to grab your charity raffle tickets.