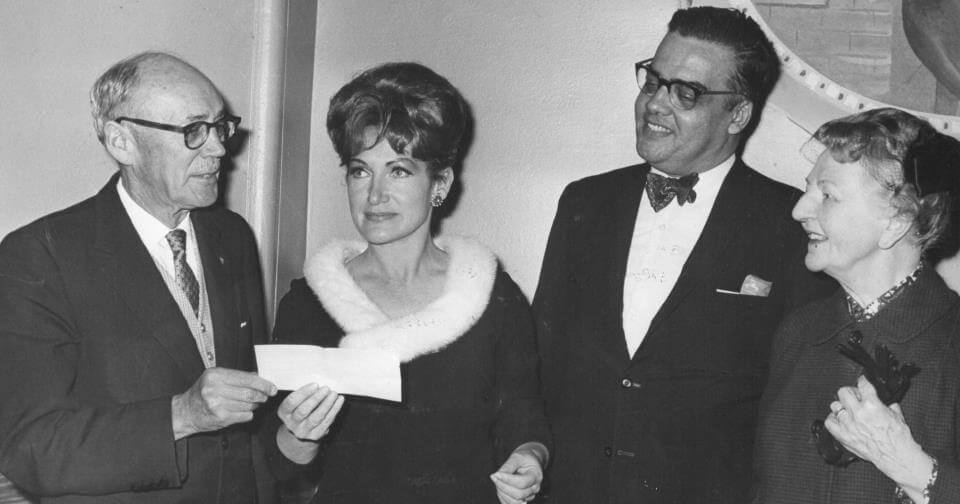 Del Cartwright presenting a cheque to Sir Kenneth for funds raised by the Teamakers' Club, with Mr G.M. Sparkes, Commissioner of the Ceylon Tea Bureau in Sydney.

A book which features the surprising stories behind two cookbooks that raised funds for Northcott has taken home an international award.

The Cook’s Handbook and The Biscuit Cook Book were released in the 1950s and sold tens of thousands of copies to raise funds and awareness for Northcott, then known as the NSW Society for Crippled Children.

Author Liz Harfull tells the tale of both cookbooks as part of her latest book, Tried Tested and True, which celebrates Australian community cookbooks and the volunteers who compiled them. The collection of beautifully illustrated stories and carefully revised classic recipes placed equal third in the food heritage category of the 2019 Gourmand Awards in Macau earlier this month.

As part of her extensive research, Liz reviewed close to 1000 different community cookbooks, visiting public and private collections, op shops and secondhand book stores across the country. She eventually selected about 60 to feature, including the two Society cookbooks which she came across in the State Library of NSW.

“My focus was cookbooks produced to raise money for worthy causes, covering a period of about 100 years, starting in the 1890s,” Liz said.

“Many of them were humble publications, but they came with a promise. People knew the recipes would be reliable because they were usually donated by home cooks with a reputation for excellence.”

But Liz had no idea of the scale of either book’s success until she made contact with Northcott librarian Judi Lipp, who delved into the organisation’s archives to find considerable information about them, their compilers and the Teamakers’ Club.

The first cookbook was produced by the Teamakers’ Club of Australia, which was set up in 1955 to raise money for the Society. Within a year, they had more than 500 members, inspired by the motto “it’s the friendship in the pot that makes the difference”. They ran afternoon tea parties, street stalls and fashion parades, and sold cups of tea at conferences and exhibitions.

“I really couldn’t have told this story without Judi’s help and the archive material held by Northcott,” Liz said.

The original cookbooks feature a combination of recipes and household tips. The Cook’s Handbook sold more than 40,000 copies, helped along by an endorsement from Sydney radio personality Del Cartwright. Also known as the Forget-me-not Biscuit Cook Book, the second publication was released in 1958 under the auspices of the Society’s Central Council of the Women’s Auxiliaries.

The idea was suggested by Margaret Crawford, a respected auxiliary member who thought it might be a good way to generate some publicity for the society, as well as raising money.

“The funds raised by the cookbooks over the years were extremely helpful to the Society as the work in the early days depended so much on voluntary efforts. The publicity to engage recognition of our work was equally important,” Judi said.

“I thoroughly enjoyed my small part in Liz’s research. Every time I look into our history with one purpose, I find other relevant material. Liz provided information on cookbooks not in our collection.

“I have a habit of baking the burnt butter biscuits, featured in her book for Northcott occasions asking for food contributions and explaining the connection to staff.”

The modest little collection of biscuit recipes sold like hot cakes. Within weeks, 10,000 copies had been distributed, with a second edition rushed into print to meet demand. By the following year, it had sold more than 35,000 copies.

Described by their Paris-based organisers as the food culture equivalent of the Olympics, the annual Gourmand Awards honour the best food and wine books, magazines, digital content and publishers from around the world attracting thousands of entries from more than 200 countries.

Tried Tested and True is available through Australian bookshops or direct from the author. For more information visit www.lizharfull.com.

Feeling hungry? Pav shares his famous fruit crumble recipe for you to make.