Encouraging amputees to get active 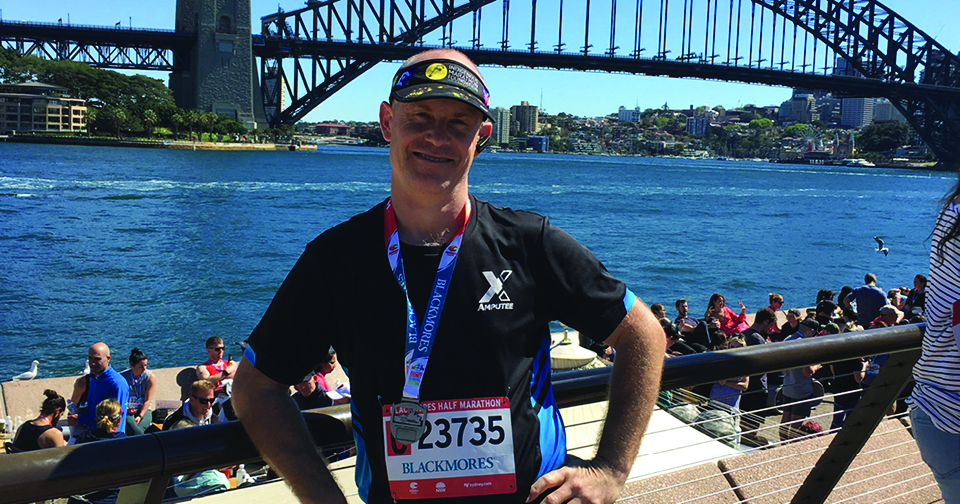 Running a half marathon is a daunting task, but that gruelling run comes with a whole new set of challenges when you’re an amputee.

“It was a 21km run but I actually ran the equivalent of 26kms because the amount of effort it takes for me, a below the knee amputee, to run 21kms is about 25% more,” Amputee Association of New South Wales President Darrel Sparke said.

On Sunday 16 September Darrel completed a half marathon as part of the Sydney Running Festival. Though he was unsure if his less-than-ideal pre-event training would be enough to get him over the line, Darrel completed the course in 2 hours and 32 minutes.

It was a pace that left many in his wake.

“I think some of the other runners didn’t realise I was an amputee until I’d gone past them,” he laughed.

“A couple of times I did have to stop or drop my pace to make sure I didn’t overwork or overheat. I had people slow down and ask if I was okay because they’ve got no experience in that space. So I would tell them that I’m just going for a tyre change and they’d laugh and continue on their way.”

The run was a personal challenge for Darrel, but it was also an example of the work Amputees NSW does in providing support for amputees, by amputees.

The keen runner’s aim was to show his fellow amputees how important it is to constantly challenge yourself – no matter what your starting point.

“If I can encourage an amputee to take that walk around the block, that will have a significant impact on their life and their ability to move forward with their amputation,” Darrel said.

Getting active is also something Darrel recognises as an important tool to manage mental health issues – which are common among amputees.

“Many amputees suffer from post traumatic stress disorder (PTSD) or depression, even those who have who gone through disease or vascular-based amputations,” Darrel said.

“The best way to recover your life is to be active and be mobile.”

Darrel’s already has plans to complete the event again next year, and with a strong relationship between Amputees NSW and Northcott, he is hoping he can encourage some Northcott customers to join him.

Want to get out and about with Northcott? Keep an eye on our events page.

Darrel isn’t the only one getting active. Read about how our Tamworth Life Skills Team love getting outside for a game of OzTag.

Not a fan of the great outdoors? Find out how pets can bring about substantial benefits to your health and wellbeing too.