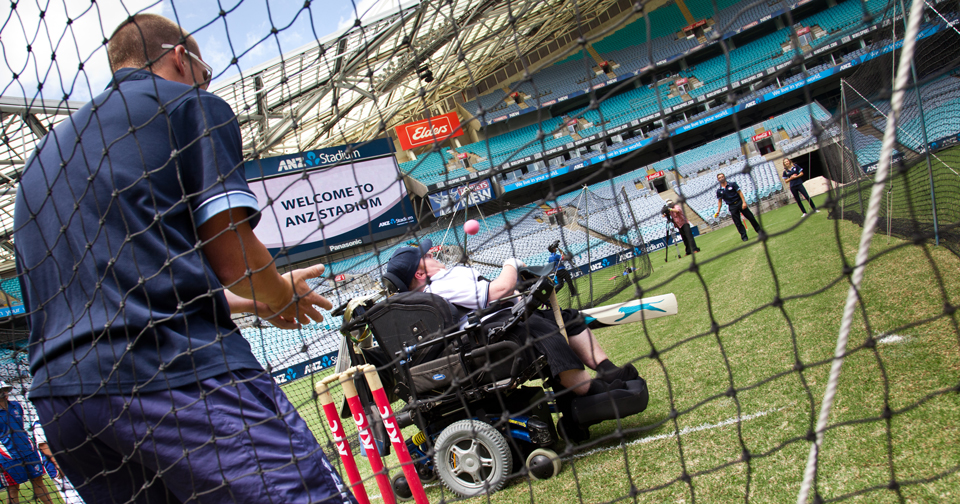 While cricket is one of the national sports of Australia, for much of its history people with disability have had to enjoy it from the grandstands as opposed to on the cricket pitch.

That all changed however when Northcott customer and employee, Ben Keyte went away on a trip with a group of men with a range of physical disabilities and talked about how great it would be if they could play cricket together.

From here the idea to create Adaptive Cricket was formed and since then there’s been no looking back.

The rules of the game make it possible for anyone to play the game regardless of whether they are able bodied, in a wheelchair or have some other form of physical disability.

As Ben says; “It started as friendly thing that you did with mates and then it developed more and more into this fully developed cricket game with rules that we kept adapting along the way. We’ve made into a format so we have two teams that play against each other so it’s a bit more competitive now but we still have fun games as well.”

About three years ago the group also collaborated with some engineering students at the University of Western Sydney as well as David Blevins from Wahoo Industries to develop a lighter and more versatile bat.

“Quick fit bats” as they were called were also developed by the group with Velcro straps that can be easily attached to any wheelchair. As Ben Knight, a former Northcott Camps and Events Co-ordinator explains; “Before we used the quick fit bats it could be a 10-15 minute process to attach a bat to a wheelchair whereas now we’ve developed bats that can be fitted in 2 minutes flat so the guys are up and out ready to bat in a matter of minutes.”

Ben Keyte says; “Its awesome being able to play. For people with disabilities to have the opportunity to play cricket is really important and because it’s a sport you can play with able bodied people. You can get out there and play with your aunties, cousins, friends from school so it’s really inclusive, it’s great.”