From our archives – Malay visitor smiles for Santa 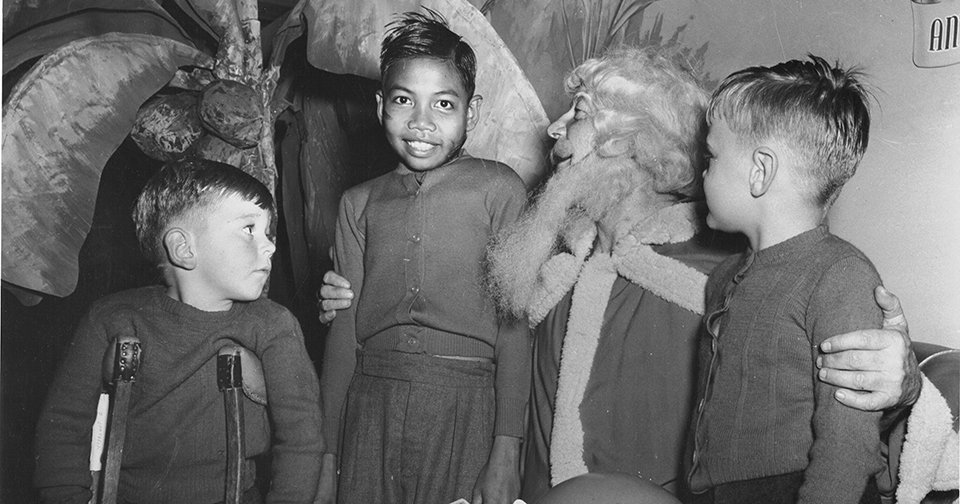 This photo of a smiling Malay boy posing with Santa shows the long-standing tradition of a Christmas Santa photo. The story behind the image gives us a glimpse of how disability was approached in times past.

For example, it was common in the 1950s and ‘60s for children from nearby British colonies to be sent to Australia for treatment.

Wan Mahdee bin Wan Ali, a 13-year-old orphan from Malaya (now Malaysia) stayed in Australia for several months to undergo plastic surgery. His visit overlapped Christmas and he visited various organisations and stores and was showered with gifts.

Part of his experience was an obligatory photo with Father Christmas at Northcott’s Margaret Reid Hospital.

The caption from the photo at the time says:

“Mahdee smiled shyly when Father Christmas asked him what he wanted, but George and Colin, two other children from the Margaret Reid Hospital for Crippled Children, had long lists ready.”

The tradition of Santa photos continues today. This Christmas season, to help your Santa photo experience also end in smiles, our behaviour support expert Penny Sydenham has prepared a series of tips for organising and managing a Santa photo visit with your child.

This photograph is from the Northcott Library Archive, illustrating Northcott’s more than 80 years of providing services to people with disability in NSW.