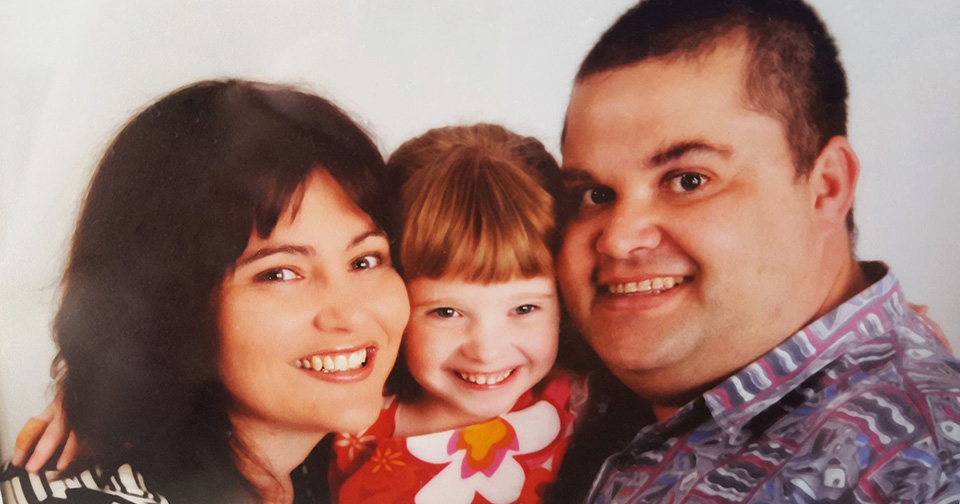 With Mother’s Day coming up this Sunday we thought it was the perfect time to chat to one of our long term customers, Sandy Moylan, about what it’s been like for her being a mum with disability.

Sandy lives with cerebral palsy and her husband Brad lives with spina bifida. The couple met while doing voluntary work at Northcott’s Tamworth office in the early 2000s. Sandy says of her relationship with Brad that it’s “based on us being friends. We’re very strong with that and we’re very happy.”

Brad and Sandy have been married for thirteen years now and have a beautiful daughter named Kirralee.

While parenting is a challenge for anyone, having two parents with a disability poses different challenges which Sandy and Brad have had to adjust to.

One of the ways they’ve done this has been to delegate household tasks to each other according to each others’ abilities. As Sandy says; “my responsibility was the laundry because I could put things up on the clothesline and I looked after Kirralee because I was the main person that had physical ability whereas Brad did his best to do the gardening and the vacuuming and cleaning. We worked together and if there was something I couldn’t do Brad would do it and if there was something Brad found hard I would do it.”

Sandy says that in Brad’s vocabulary “there’s no such words as ‘I can’t’. If he can’t do something he will do everything in his power to find a way to do it”. Sandy attributes Brad’s positive mental outlook to his mother who she says was very proactive in the way she raised him. “She taught him that if you want something you go out there and you get it. Particularly with regard to his independence. She was a very strong person behind him.”

Sandy says that Brad’s outlook has also helped her to understand her disability better and to feel more settled.  “Whereas before I used to find it hard to accept my disability now I try to work within my limitations so if something doesn’t quite go my way I try to approach it in a differently so I manage things a lot better now and I’m a lot happier with myself.”

Does Sandy have any advice for prospective mums and dads with disability? “Yes. Just believe in your own ability. I honestly believe that with the right support everyone is quite capable of doing whatever they want.”